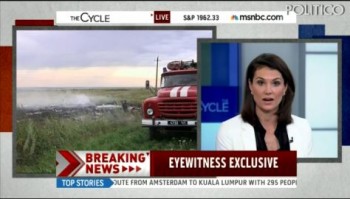 A screenshot from the interview.

MSNBC boasted it secured an “eyewitness exclusive” report about the Malaysia Airlines plane crash in Ukraine this week. But, MSNBC was duped and aired a prank call. Making matters worse, the MSNBC reporter apparently didn’t realize she was being pranked and the hoaxster called her a “dumbass” on air!

So what went wrong?

On Thursday, July 17, the day MH17 crashed in Ukraine killing the 298 on board, MSNBC’s Krystal Ball promoted an exclusive interview with someone from the U.S. Embassy in Ukraine.

“US Staff Sergeant Michael Boyd is at the US Embassy in Ukraine, and says that he saw a missile in the air hit the plane,” Ball said. “He is on the phone with us. Please tell us what you saw there on the ground in Ukraine,” Ball asked.

The man on the phone who identified himself as Boyd said, “Well, I was looking out the window and I saw a projectile flying through the sky and it would appear that the plane was shot down from a blast of wind from Howard Stern’s ass.”

But, Ball didn’t seem to respond to the comment, which clearly indicated the man was not giving an eyewitness account, but instead playing a joke on her.  Instead of ending the interview, or asking the man who he was or why he lied, she tried to continue the interview.

“So, it would appear that the plane was shot down,” Ball said. “Can you tell us anything more from your military training of what sort of missile system that may have been coming from?”

To that, the man simply said, “Whoa, you’re a dumbass, aren’t you?”

Politico reported that an MSNBC spokesperson, Lauren Skowronski, called the prank “an unfortunate incident.” Skowronski added that “we immediately clarified for our viewers.”

Ball commented on the hoax later in the program: “We thought we had an eyewitness on the scene, that individual was not actually an eyewitness,” according to the Daily Kos.

iMediaEthics has written to the U.S. State Department and the U.S. Embassy in Ukraine to ask if there is a Michael Boyd at the embassy and for comment. iMediaEthics has also asked MSNBC how it vetted the man who pranked them.