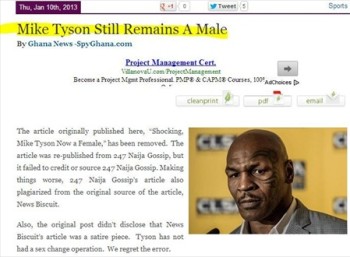 SpyGhana posted the above note after learning from iMediaEthics that its article failed to credit its source.

The Standard was not the only media outlet to get tangled up in the Mike Tyson sex change story.  SpyGhana, which describes itself as “Ghana’s leading general news and information destination online,” also reported on the hoax story as if it were true, Business Insider noted.

SpyGhana’s Dec. 11 story, “Shocking: Mike Tyson now a female,” didn’t carry any disclosure or hint that it isn’t real. It didn’t even carry a question mark at the end of its headline! While SpyGhana didn’t initially publish a correction on the original article, it did publish a follow-up story reporting that Tyson “denied rife online media reports” about the alleged sex change.  That report didn’t mention that SpyGhana fell for the hoax.  Tyson is quoted as giving a statement reading:

“I am still a man and I have always been fully in touch with my masculinity and have no intention of becoming a woman. The claims are not only untrue but unbelievably stupid. I was at the Pacquiao-Marquez fight on Saturday and any reasonable person could tell I was looking like a man.”

Most of the SpyGhana report was also stolen verbatim apparently from News Biscuit, but there wasn’t any credit, sourcing or attribution given to News Biscuit. The article carried the byline of “SpyGhana Reporter.”

After iMediaEthics contacted SpyGhana, which says on its website that it “integrates credible Ghanaian content and perspectives,” asking for a correction and why SpyGhana took credit for the News Biscuit story, a new “Source” line was added to the story.  See below a screenshot of the bottom of the original article, and then a screenshot of the article with sourcing added.

The original SpyGhana article didn’t include any sourcing, but later SpyGhana added a note at the bottom of the article to credit its “source.” (Credit: SpyGhana, screenshot)

Where the story originally made no mention of News Biscuit, following iMediaEthics’ inquiry, “Source: News Biscuit” was posted at the bottom of the story. See below:

SpyGhana added at the bottom of its article a note disclosing its “source” after iMediaEthics’ email. Later, SpyGhana unpublished the report in total. (Credit: SpyGhana, screenshot provided by Roger Agana, highlight added)

In emails, SpyGhana’s Roger Agana said at first that SpyGhana had “rewritten” the News Biscuit story and later that it had originally attributed the story to News Biscuit and wasn’t trying to take credit for it.  Then, SpyGhana unpublished its story. See below the original SpyGhana story. We highlighted every word that was News Biscuit’s wording.

See SpyGhana’s report above. iMediaEthics highlighted every word that is verbatim from News Biscuit’s story.

So, what seems to have happened is:

Mushura acknowledged that SpyGhana didn’t give News Biscuit any credit for the story until iMediaEthics contacted the site, writing “there was no source… but after getting your mail he got the source.”  She also provided SpyGhana’s copyright policy, which reads:

Mushura, who noted that Agana is “still learning,” agreed to post a correction on the original article link reflecting that the article was a hoax and that SpyGhana failed to credit News Biscuit. She asked iMediaEthics to help with the wording of the correction.  We explained that we could provide an example of what we would do for such a correction along with some how-to articles on journalism corrections.

Mushura added in a Jan. 8 email that, despite 247 Naija Gossip’s lack of sourcing, Agana “should have checked well before republishing the article and give proper sourcing to the article.”  On Jan. 10, SpyGhana published a note, “Mike Tyson Still Remains a Male,” which includes iMediaEthics’ suggested text for a correction. It reads:

“Also, the original post didn’t disclose that News Biscuit’s article was a satire piece.  Tyson has not had a sex change operation.  We regret the error.”