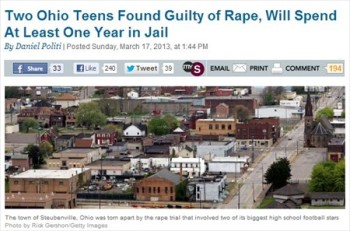 The girl was named when the news outlets “aired a clip of one of the defendants, Trent Mays, apologizing to the victim in the courtroom,” the Huffington Post explained.

The Raw Story included a clip of Fox News’ error, but the Raw Story added a redaction to protect the girl’s identity.

According to an editor’s note on the Raw Story’s website, it has found that the four outlets that named the victim have since apparently taken down or edited the clips in question.  Media Bistro’s TV Newser argued that naming the victim wasn’t intentional, writing:

“In all the cases it was clearly accidental, as the outlets have a policy of not revealing the names of victims.”

CNN noted in one of its news stories about the case that its “policy is not to identify alleged victims of sexual assault,” and that it wouldn’t name “minors who have testified.” But, CNN said it decided to name the two defendants because their “names have been used by court officials, their attorneys and in multiple media accounts.”

iMediaEthics discussed the issue of naming and decided to name the pair because they are convicted of the crime and their names and images have been widely made public.

However, Fox News also made a point to not “name the underage defendants,” The Atlantic Wire noted, by posting an “Editor’s Note” on an article explaining:

“Editors’ Note: The Associated Press named the minors charged due to the fact they have been identified in other news coverage and their names were used in open court. FoxNews.com will not name the defendants.”

Separately, CNN was criticized by Gawker, Huffington Post and others for reporting that was sympathetic to the convicted rapists in its coverage of the case.

Fox News called iMediaEthics, but declined to give an on-the-record comment.

iMediaEthics has written to CNN, MSNBC, and WTRF asking how the clip made it to the air, if any apologies will be or have been issued, and how repeat incidents will be avoided. In addition, we’ve asked CNN for response to the criticism of its coverage as sympathetic to the defendants. We’ll update with any responses.

The issue of naming rape victims is one iMediaEthics has covered often before.

Just last month, the UK Daily Mirror was fined  £1,200 and separately called out by the Press Complaints Commission for naming a sexual assault victim in a 2011 story.

Also in February, Thai newspaper The Daily News published the photo ID of a Scottish tourist who had been raped while on vacation in Thailand, but unpublished the identifying information after criticism.

In January, the UK People named a woman who was gang-raped in December in Delhi, India. The woman later died.  The People said her father said the paper could publish her name, but the father later reportedly said he didn’t.