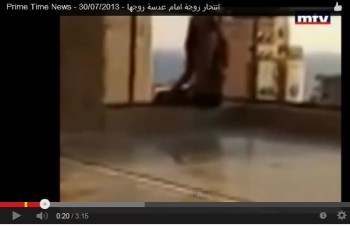 A screenshot from MTV Lebanon's report on a woman's suicide. The woman was sitting on the edge of a balcony and eventually pushed herself over. (Credit: YouTube, "MTVLebanonNews," screenshot)

MTV Lebanon aired a video clip of a woman committing suicide, Magda Abu-Fadil, the director of Media Unlimited in Lebanon, wrote for the Huffington Post. Viewers weren’t given any “warning or disclaimer” about the sensitive nature of the video, which was aired on MTV Lebanon’s “primetime evening newscast.”

MTV Lebanon posted its segment on YouTube. While it is not in English, you can hear the husband apparently pleading with a woman sitting on a ledge of a balcony. You can see the woman go over the edge and the husband screaming. The video as shown by MTV Lebanon isn’t clear enough, in iMediaEthics’ opinion, to show the woman’s face and the man’s face isn’t shown.

The Lebanese Daily Star reported that in the video before the woman pushes herself off the ledge, the husband asked his wife, “What is wrong, my heart? If something is wrong, tell me my darling.”

He goes on to comment that “your mother doesn’t deserve this.” While the Daily Star named the husband, iMediaEthics is not going to identify the couple to protect the family’s privacy. We are including the video of MTV Lebanon’s segment embedded below in order to illustrate what the controversy is about.

MTV Lebanon’s head of news and political programs, Ghayath Yazbeck, defended the video in an interview with the Huffington Post, commenting that “It’s not a violent scene.”

“We didn’t do a live standup in front of a bleeding corpse,” Yazbeck is quoted as saying, making iMediaEthics wonder if that was an option MTV Lebanon would have considered. Further, he argued that they just reported off information found on YouTube.

“We didn’t shoot the video, we just took it off social media,” Huffington Post quoted him as saying.

On the other hand, the Huffington Post cited Lebanese media expert Tony Mikhael and the Ethical Journalism Network’s Aidan White arguing that MTV Lebanon should have included more context in reporting instead of just using the video to get views.

iMediaEthics has written to the Beirut police asking for confirmation of the woman’s death, if the husband is being investigated in relation to the death, and if the police know either why the wife committed suicide or why the husband recorded it.

We’ve also reached out to MTV Lebanon asking for more information about its decision to air the video. We’ll update with any responses.