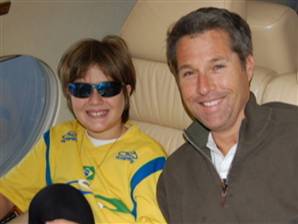 Photo from NBC exclusive. David Goldman and son are shown on a private jet that NBC News hired to bring embattled father and son home from Brazil.

After NBC offered David Goldman and his son Sean a free plane ride back to the United States from Brazil at the end of a long custody battle last week, the Society of Professional Journalists issued a statement criticizing the move and accusing NBC of practicing “checkbook journalism.”

NBC has now issued its own response, defending their actions, and arguing that the free flight was not “payment” to Goldman for subsequent interviews on NBC. Can a network, or an individual journalist, give this kind of a gift (or payment) to a source without affecting their journalistic integrity?

SPJ says no. Their statement, issued Monday, argues that by providing the flight, whether or not it was intentionally in payment for exclusive interviews, NBC became complicit and involved in the story itself, no longer an independent observer. “In effect, the network branded the story as its own, creating a corporate and promotional interest in the way the story unfolds. NBC’s ability to report the story fairly has been compromised by its financial involvement,” they write.

The SPJ code of ethics, “urges journalists to act independently by avoiding bidding for news and by avoiding conflicts of interest,” the statement reads, calling “buying — directly or indirectly — interviews” an “unseemly practice that raises questions of neutrality, integrity and credibility.”

Gawker points out that this is neither the beginning nor the end of “checkbook journalism” at NBC or elsewhere, and questions why SPJ chose this instance to critique. StinkyJournalism recently wrote about NBC failing to disclose its relationship with Bravo when interviewing the White House party crashers–another financial complication. This week it came out that ABC, the New York Post, and CNN all paid for photos from a passenger on Northwest flight 253 of last week’s attempted terrorist attack. (Interviews were offered to media that bought the photos, but CNN denies that it paid for its interview with passenger Jasper Schuringa.)

NBC says that they didn’t intend to buy interviews with the free plane ride.  A Multichannel News report reveals NBC’s response to the SPJ critique:

“The Goldmans were invited on a jet NBC News chartered to fly home to the U.S. on Thursday, Dec. 24,” the network told Multichannel News in a statement. “NBC News has followed this story since the Goldman’s story first ran on Dateline nearly one year ago — David Goldman since has appeared on Today seventeen times.”

“NBC News has not and will not pay for an interview.”

The implication seems to be that Goldman already had a relationship with NBC after numerous interviews, and it was this history–not securing the subsequent exclusive interviews on the flight, and again afterward–that spurred the network to offer him and his son a seat on the plane.

However, as the SPJ statement points out, journalistic credibility isn’t only about avoiding conflict, but also about avoiding even the appearance of conflict. Though NBC says the flight wasn’t an interview payoff, “The public could rightly assume that NBC News bought exclusive interviews and images, as well as the family’s loyalty, with an extravagant gift,” SPJ writes.