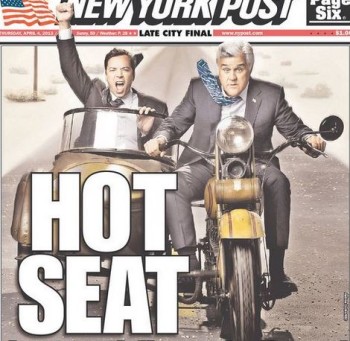 The Daily News, New York Post, Hollywood Reporter, Village Voice, Fox News and other news outlets published a photograph of Jay Leno and Jimmy Fallon that used a fake background, but none of the news outlets disclosed this to readers.

The image, released by NBC and taken by photographer Andrew Eccles, shows Leno on a motorcycle with Fallon in the sidecar. It was published on the front page of both The New York Daily News and The New York Post.

iMediaEthics suspected the image was somehow faked.  Look at the background of the image — it doesn’t look real.

NBC confirmed to iMediaEthics by phone that it didn’t use Photoshop.  Leno, Fallon, the motorcycle and the sidecar were all real and present for the photoshoot. But, NBC did use “a fake background and a fake road” for the image.

“We were just trying to create a fun environment for them to be in and they liked the idea of a motorcycle and a sidecar,” an NBC spokesperson said of Leno and Fallon.

The above front page image of Fallon and Leno was used by many news outlets and released by NBC. Note the fake road and background. (Credit: NYPost, via Newseum, screenshot)

NBC Faked it, No Disclosures

NBC as an entertainment outlet releases promotional materials — not news photos. So media outlets should be well aware images may be faked, making the burden of vetting images for Photoshop on news outlets.

The Daily News and Post often use composite images on their front pages. (See a report we did recently on front pages featuring the “cannibal cop” Gilberto Valle.)

Most of the time, they properly put a label on or near the photo disclosing them as “photo illustrations” or “photo composites.”

However in this case, The Daily News,  which Photoshopped the NBC photo, didn’t put either a disclosure for that Photoshop or a photo credit.

The Daily News’ front page photo doctored the NBC-image of Leno and Fallon to add flying money and stacks of cash on Fallon’s lap. See the addition of money.

An NBC spokesperson confirmed the Daily News didn’t get the photo it published from them.  “No, not from us at all,” he told iMediaEthics. “They manipulated it. We didn’t take any pictures like that.”

The Daily News doctored NBC’s photo. Note the addition of money. Also, the digital version of the cover, above, had a photo credit and disclosures of illustration. But the print version did not. (Credit: Newseum, screenshot)

While the online version of the cover, published on Newseum‘s website, includes a tiny disclosure that the image is a New York Daily News illustration of a photo provided by NBC, the print edition doesn’t have any disclosure that iMediaEthics could see.

The Daily News did include a photo credit and disclosure of illustration in the online version of its front page. (Credit: Newseum, screenshot detail, red circle added)

WHERE’S THE PHOTO CREDIT? In the print version of The Daily News, there was no disclosure of Photoshop or a photo credit. (Credit: NY Daily News)

Did The Daily News Violate NBC’s Copyright by Doctoring Picture?

NBC told iMediaEthics that the image it released to media was clearly labeled with a disclaimer “not to manipulate the image.”  After we asked them if NBC was aware of the Daily News’ Photoshop job, we were told NBC would be contacting The Daily News about it.

iMediaEthics called The Daily News photo department asking about NBC’s warning not to alter its photo. A person iMediaEthics isn’t naming in order to protect their job laughed and commented: “Their manipulated photo shouldn’t be manipulated? That’s funny.”

iMediaEthics has asked the Daily News by phone and email why it didn’t properly label a photo credit for the NBC photographer and disclose the Photoshop job to its print readers.

An email has also been sent to representatives of the photographer, Andrew Eccles, asking about the absence of a photo credit to him and the alteration of his image on the front page of The Daily News. We’ll update with any responses.

As mentioned earlier, iMediaEthics wrote just last month when the New York Post doctored its front page photo of “cannibal cop” Gilberto Valle.  The disclosure on that Photoshop job was so minimal iMediaEthics almost had to break out a magnifying glass to find it.