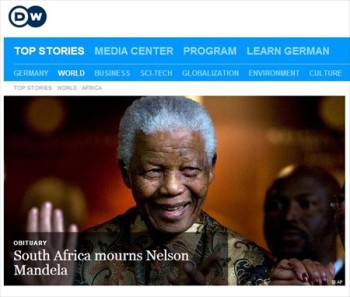 In a June 14 retraction statement, the German “international broadcaster” said it “unintentionally” posted the story and has since unpublished.

“We regret that due to a technical error our report of Nelson Mandela’s death was unintentionally published. It has now been taken down,” reads the statement.

“Nelson Mandela, South Africa’s first black president ,who was sentenced to life in prison in 1964 because of his fight against apartheid, has died. He will be remembered as an inspiring freedom fighter.”

At the bottom of the article, the site invited readers to email the site with their comments on “How will you remember Nelson Mandela.”

Mandela, 94, is in the hospital for a lung infection, but hasn’t died.

iMediaEthics wrote to Deutsche-Welle asking how the error happened and how long the story was posted. Deutsche Welle’s International Communications Oficer Xiaoying Zhang responded to iMediaEthics inquiry with the following basic statement:

“We regret that due to technical difficulties, the report on Nelson Mandela’s death was unintentionaly published on Friday evening. We removed the article in the shortest time possible and published tweets on this error immediately.”

In April, South Africa’s DStv also wrongly said Mandela had died. According to the International Business Times, DStv is owned by Comcast Corporation and its parent company apologized “for the alarm and offense caused by this error.”

And, back in 2011, the South African Times wrongly tweeted that Mandela was hospitalized when he wasn’t.  The Times had apparently based its tweet on a report from a radio host who was mistaken.

Accidentally hitting the publish button on an already prepared obituary for a high-profile public figure isn’t unheard of.  Back in April, Reuters wrongly published an obituary for billionaire George Soros.

And in December, German site Der Spiegel ran an obituary for former U.S. President George H. W. Bush, who had been in the hospital. Der Spiegel said it was a “technical problem,” but the obituary also got attention for describing the former president as a “colorless president.”