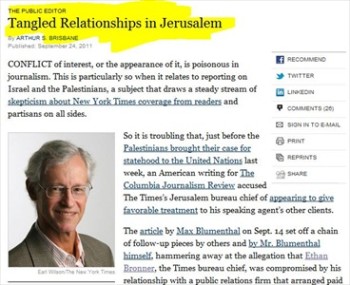 The New York Times’ public editor, Arthur Brisbane, weighed in on the issue Sept. 24 noting that while he doesn’t see Bronner’s relationship with Lone Star to be “an actual conflict of interest…the appearance of a conflict clearly exists, and that is a problem in and of itself.”

According to Brisbane, Bronner “has now severed his ties” with Lone Star.  “In my view, it is all about appearances,” Bronner is quoted as saying to Brisbane.

Read Brisbane’s full analysis of the criticism of Bronner here.