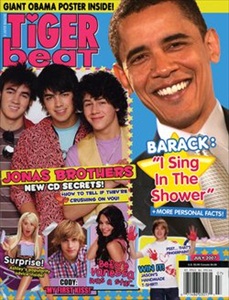 The above Tiger Beat magazine cover is a phony, but the New York Times fell for it. The Times has issued a correction. (Credit: The Onion)

The New York Times corrected its April 17 article on teen magazine Tiger Beat’s clean image after being hoaxed by a doctored image on satirical site The Onion.  The Onion’s doctored photo showed Barack Obama on Tiger Beat with the quote “I sing in the shower.”

The hoax magazine cover was pulled from a 2007 Onion story that claimed Obama’s “approval and dreaminess ratings among slumber party-attending tweens have risen” after his appearance on the cover.

The Onion article included the comment from a phony 12-year-old subscriber that “barack is sooooo hot!”and that she “totally” backs his 2008 candidacy — not that she could vote in those elections or anything.

“A series of pictures last Sunday of covers of the magazine Tiger Beat, with an article about how the original teen-girl tabloid has remained virtually unchanged since its inception in 1965, erroneously included a parody cover, produced by the satiric newspaper The Onion, that featured a picture of President Obama.”

“It’s mind-boggling to think that major newspapers are still getting fooled by The Onion. A recent issue featured Bob Dole as a cyborg!” the Baltimore Sun wrote.

Business Insider recommended adding the Times’ correction to “the best corrections ever file.”