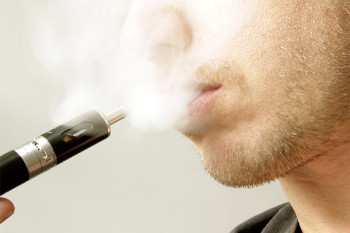 The New York Times was hoaxed by a Twitter user it interviewed for a story on the use of e-cigarettes, “Use of E-Cigarettes Rises Sharply Among Teenagers, Report Says.”

The Times published an editor’s note today saying it scrubbed the person’s interview from its report because the self-identified teenaged interviewee admitted to making up “some of the information” he gave the Times, such as his name.

The editor’s note appended to the April 16 article reads:

“An earlier version of this article included the account of an 18-year-old from Jackson, Miss., who discussed his use of e-cigarettes. After publication, the person who had provided that account contacted the reporter and said he had made up some of the information, including the name he used. That passage has been removed from the article.”

iMediaEthics checked the article out on NewsDiffs. It appears the editor’s note was added at 7:09 PM April 17.

The original Times article was re-published on the Boston Globe’s website here. The now-removed section featuring the hoaxer, “Joe Stevonson” aka @drugleaf, is below:

“Joe Stevonson, 18, a senior at a high school in Jackson, Miss., said he used e-cigarettes to quit smoking, after the habit started affecting his ability to play sports. He prefers a flavor called Courtroom, endorsed by the rapper Lil Ugly Mane, which is described on websites where it is sold as “a medley of things you might want while waiting for the jury to convict.”

“As for whether he still craved cigarettes, “the only thing that’s really missing is feeling like your entire mouth is coated in dirt,” he said. “I’ve seen a lot of people who don’t smoke pick them up because it looks cool. But for every person I’ve met like that, I’ve met another using it like it’s a medicine against cigarettes.”

Gawker pointed out that the Times should have realized it was inviting hoaxers when it tweeted looking for sources. “The tweet is so inherently and absurd and ripe for trolling,” Gawker wrote, noting that one of its staffers even responded. Below is the tweet from the Times.

If you’re a teen that vapes and want to talk to a reporter twice your age about why you love it contact @stavernise sabrinat@nytimes.com

Gawker interviewed the hoaxer, who has admitted to the fakery and said on Twitter the Times reporter was “very nice and I wish to bring her no suffering.”

that turned into me giving someone a fake interview under an alias. that interview was used in a web article. this article is in print now. — LeVar Burzum (@drugleaf) April 17, 2015

iMediaEthics has written to the Times and its reporter Sabrina Tavernise for comment.