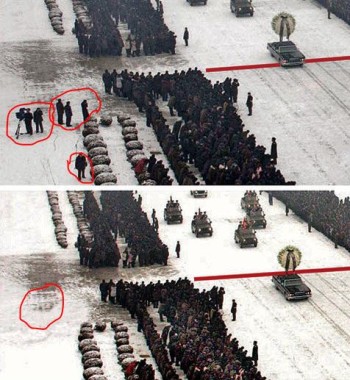 The New York Times took down a Photoshopped photo of Kim Jong-Il’s Dec. 28 funeral, the Times disclosed in a Dec. 28 blog post.

According to the Times, a photo comparison (above or here on the Times’ website) indicates a group of men and a camera were cut out of the photo.  The New York Times compared the fake photo with a Kyodo News photo of the same area. The photo came from “European Press Photo Agency via Korean Central News agency,” according to the New York Times. The New York Times reported that the photo agency “did not respond to numerous phone calls” but that “just after 6 p.m.,” it pulled the photograph and told clients “We have since been made aware that the image has been altered by the supplier, and the image was moved in error.”

The photo was published in the Times’ “Pictures of the Day” — before the newspaper found out about the doctoring. The Times’ Photo of the Day feature includes a note that “Another photograph of this scene distributed by the North’s state news agency and transmitted to news organizations by the European Pressphoto Agency was digitally manipulated by the North to remove an errant group of men.”

We wrote in July when the Associated Press added a “kill notice” to an Associated Press-released photo that was revealed to be doctored. The photo also originated from Korean Central News Agency.

Plhal told us that European Pressphoto Agency “sought credentials to cover the event with a staff photographer, but was denied entry by the North Korean authorities.

“Just as with other news agencies, the sole source for the funeral coverage was the state-run North Korean ‘KCNA’ news agency and unfortunately, because of the nature of the regime, there is no communication with the editorial management of KCNA.

“As soon as we were alerted and able to verify (with the help of the Kyodo picture) that parts of the image had obviously been manipulated, we informed all clients with a mandatory picture kill notice. Any kind of digital manipulation violates epa’s code of ethics, which is in full compliance with the ethics set forth by the National Press Photographers Association. The picture would not have been moved if the manipulation had been spotted initially.

“epa was first to withdraw the image and make users aware of the situation, hours ahead of other agencies who also used the identical image.  We consider the dialogue about what happened as part of a transparent and responsible clarification process and kindly ask you to contribute to a fair and balanced reporting of the event which does not focus on one agency exclusively.”

UPDATE: 12/29/2011 1:40 PM EST: In a postscript on the New York Times’ initial story on the photoshop, the Times notes that Reuters and Agence France Presse also sent out the photo and have “issued a kill on the image.”