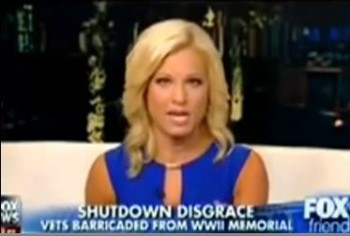 Fox News was hoaxed by a satire story claiming President Barack Obama was going to “pay out his own pocket for the Museum of Muslim Culture.”  That was “juxtaposed perfectly against a story of veterans being denied entry into the World War II memorial” because of the government shutdown, Mediaite reported.

“And President Obama has offered to pay out of his own pocket for the Museum of Muslim Culture, yet it’s the Republican National Committee who’s paying for this.”

Check out video of the clip, via Media Matters.

Kooiman’s claim was based on an Oct. 3 satire story, “Obama Uses Own Money to Open Muslim Museum Amid Government Shutdown.”  The story claimed that Obama “held a press conference to announce that he is using his own money to open the federally funded International Museum of Muslim Cultures.” (FYI, in reality, the Associated Press reports that there is an International Museum of Muslim Cultures in Mississippi but that it doesn’t get federal money. “The museum does not take federal operating funds and is not affected by the shutdown, said Okolo Rashid, its co-founder,” according to the AP.)

“The Grand Canyon and the Smithsonian are not going anywhere. The International Museum of Muslim Cultures is sacred. That is why I have taken it upon myself to use my own personal funds to re-open this historic piece of American culture.”

It also quoted a “member of the Muslim Brotherhood‘s Freedom and Justice Party,” Khaled Matei as telling CNN that he “personally thanked” Obama.

The story was published on National Report, which claims to be “America’s #1 Independent News Team.” The bottom of the website hints that it’s not a straight news site because a disclaimer about information on the site reads:

“Advice given is NOT to be construed as professional. If you are in need of professional help, please consult a professional. National Report is not intended for children under the age of 18.”

Likewise, Yahoo News added that some of the headlines on National Report include: “Jesus Christ boycotts Hobby Lobby” and “Police barge into kindergarten classroom and taser multiple children ‘for the check of it.’”

Just met w producers- I made a mistake yday after receiving flawed research abt a museum possibly closing. My apologies. Won’t happen again.

Media Matters, which busted Kooiman for the bogus information in an Oct. 5 report, pointed to the Associated Press’ Oct. 7 story saying that a Fox News spokesperson, Dana Klinghoffer, said an on-air correction will be made on Fox & Friends Oct. 12 show.