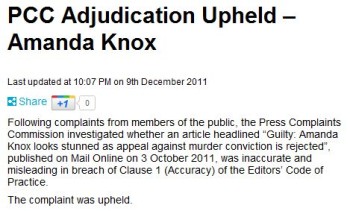 UK print regulatory body the Press Complaints Commission “censured” the Daily Mail for its October 3 fake story reporting the wrong verdict in American student Amanda Knox’s trial, the Guardian’s Roy Greenslade reported.  As we wrote at the time, soon after an Italian court found Knox not guilty in the murder of her roommate, the Mail published a story with the wrong verdict saying she had been found guilty.  Shortly after publication, the Mail pulled the story from its website.  The Mail published a story with the correct verdict (not guilty) and apologized for the error.

Possibly most egregious, the Daily Mail’s article included quotes from prosecutors on the (fake) guilty ruling and reported on Knox’s reaction to the (fake) guilty ruling.  The PCC’s ruling (see here) said that complainants questioned those quotes from prosecutors about the verdict of guilty, and a description of what happened after the guilty verdict.  According to the PCC, the complaints were made by “members of the public.”

The PCC’s ruling noted that the Daily Mail claimed the quotations “had been obtained from the prosecution in advance of the trial.”  However, even if that is true, iMediaEthics notes that there is no possible way for the Mail to explain away its claim that Knox “looked stunned” in response to the phony guilty verdict.  That part of the story was clearly fabricated and a guess on behalf of the Daily Mail as to how Knox would react.

The PCC highlighted the Daily Mail’s quick response to the factual story and apology, but expressed concern about the details in the fabricated story “especially the account of the reaction by those in the courtroom to the apparent verdict, and to the subsequent actions of Ms Knox.”  The PCC called that part of the story “clearly not acceptable.”

The PCC also issued a press release about the ruling here.  According to the press release, the PCC’s director Stephen Abell called the ruling “a common-sense decision.”

“The article described reactions and behaviour that had not taken place, which is a clear breach of the Code,” he added.  “We are pleased that Mail Online has undertaken to change its processes as a result, which should stop this happening in future”.

As part of the censure, the Daily Mail had to publish the PCC’s ruling in full here.