Plagiarize and be 'Dismissed' from School, Says Arizona State University 'I 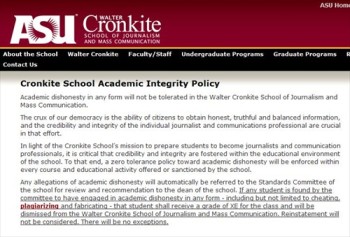 We wrote to ASU asking if the school had taken any action against the student, since the Tribune noted that it contacted the school about the plagiarism.

We heard back from Kristin Gilger, the associate dean of Arizona State University’s Walter Cronkite School of Journalism and Mass Communication.  Gilger told us by email that “universities are prevented under the federal Family Educational and Privacy Act from discussing the academic record of any student” but directed us to the journalism school’s “academic integrity policy” and “integrity pledge.”  Gilger added that “Every Cronkite student in every class must read and sign the pledge. ”

“Any allegations of academic dishonesty will automatically be referred to the Standards Committee of the school for review and recommendation to the dean of the school. If any student is found by the committee to have engaged in academic dishonesty in any form – including but not limited to cheating, plagiarizing and fabricating – that student shall receive a grade of XE for the class and will be dismissed from the Walter Cronkite School of Journalism and Mass Communication. Reinstatement will not be considered. There will be no exceptions.”

The school’s “Academic Integrity Pledge,” which was “updated” this fall, says that plagiarism and fabrication break “two of the most important standards we uphold as journalists” and advises students to either “quote and attribute” or “paraphrase and attribute.”  Attribution is required under the pledge unless it’s “common knowledge,” “background information,” or “observation.”   The pledge also instructs students regarding press releases, writing that “the rules of attribution apply.”

Further, the pledge says that it treats all plagiarism the same if it was “intentionally” done or not and defines plagiarism as

“using someone else’s words, phrases, sentences or ideas without giving credit. This is true whether you do it intentionally or inadvertently.”

The guidelines also instruct on attribution, plagiarism and fabrication in multimedia.