Polls on US Troop Withdrawal from Afghanistan: "Yes! Yes! Maybe! Maybe! Hell No!" 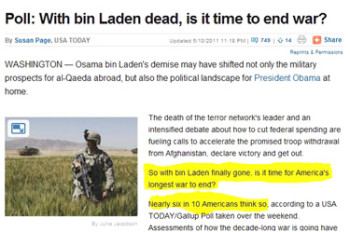 In the aftermath last month of the killing of Osama bin Laden, many progressives began calling for the withdrawal of U.S. troops from Afghanistan, as did some Republicans, while others called for maintaining the course.

Soon pundits began pontificating about what the public might think of such an action. Sure enough, the media polls came to the rescue. And true to form, they gave us a Picasso-esque picture of the public – simultaneously strong support for withdrawal, even stronger support for maintaining troops in Afghanistan, and about equal support for each position.

dly, each poll showed only a small percentage (3% to 8%) undecided!

Note that the timing of the polls cannot account for the different results. The dates of interviewing are all pretty close to each other. In fact, the Pew and Gallup/USA Today polls cover the exact same time period (May 5-8), while the NBC/Wall Street Journal poll is just a day shorter (May 5-7). The polls by CNN and CBS/New York Times occur just a few days earlier (May 2, and May 2-3 respectively) than the others – but all were conducted within a few days of bin Laden’s death.

Now I know that poll sophisticates will immediately claim that there’s nothing necessarily wrong with any of the polls – they just asked the question about troop withdrawal a little differently, and thus produced different results. See above Moore’s comparison of polling results from early May.

Nothing wrong here…so they claim.

Yet, the messages these polls deliver to politicians, pundits and the press are starkly contradictory:

“So with bin Laden finally gone, is it time for America’s longest war to end?

Nearly six in 10 Americans think so…”

MSNBC  on the NBC/WSJ poll:

“Yet the American public sends this overwhelming message when it comes to Afghanistan: Now is not the time to withdraw U.S. troops after bin Laden’s death in nearby Pakistan.”

A report in the New York Times on the CBS/NYT poll:

“…public opinion is not clear on when or how the United States should leave Afghanistan.”

Pew’s take on its own poll:

“Currently, 43% favor keeping U.S. troops in Afghanistan until the situation there has stabilized, compared with 49% who support removing the troops as soon as possible.”

I couldn’t find where CNN had announced its own findings in a news story, though the results were posted on its website, showing 32% of Americans wanting to maintain at least the same number of troops in Afghanistan (4% increase troops, 28% keep same level), while 64% wanted to withdraw either “some” troops (34%) or “all” troops (30%).

Of course, the poll sophisticates are right to say that the major reason for the different results is question wording, though question context (the questions that preceded the troop withdrawal question) is probably a factor as well.

Look at this wording from the “Hell No!” results obtained by the NBC/WSJ poll:

Statement A: “The Unites States should remove our troops from Afghanistan because bin Laden’s death indicates the Taliban and Al Qaeda are less of a threat and our presence there is no longer necessary.”

Statement B: “The United States should keep our troops in Afghanistan because bin Laden’s death does not change the overall mission of securing Afghanistan and the Taliban and Al Qaeda still remain a continuing threat.”

As MSNBC noted, a “whopping” 72% chose the latter option. “Whopping” indeed! Could the question have been any more tendentious? You’d think the pollsters (one a Republican, the other a Democrat) were working directly for the defense industry!

Why did the pollsters frame the issue as to whether the Taliban and Al Qaeda are still threats? That clearly biases the question, suggesting the “right” answer is to keep the troops in Afghanistan.

The pollsters could have kept their simplistic (yes or no) approach if they had eliminated the “because” phrases (put in italics above), and asked whether the U.S. should or should not remove its troops from Afghanistan (letting respondents come up with their own reasons to justify their responses). Had the pollsters done so, their results would no doubt have been much different.

The Gallup/USA Today question is much simpler:

“Which comes closer to your view?

“The U.S. has accomplished its mission in Afghanistan and should bring its troops home.

“OR, The U.S. still has important work to do in Afghanistan and should maintain its troops there.”

While this question is simpler than the NBC/WSJ question, it still provides a reason (either the U.S. has or has not accomplished its mission), which essentially forces the respondents to think of the issue the way Gallup wants them to (rather than the way each individual respondent may view the issue).

Again, why not ask simply whether the U.S. should bring its troops home or keep them in Afghanistan?

The truth is, of course, that many people simply aren’t paying a whole lot of attention to what is going on in Afghanistan. If you go to the websites of each of these pollsters, you’ll find that not one of them gave the respondent an explicit option of saying “I don’t know.” Instead, they all used a forced-choice format to pressure the respondents to come up with an opinion – and in each case, more than 90% came up with a response.

Since most respondents aren’t paying attention to the details of what’s happening in Afghanistan, but are forced (pressured by the structure of the question) to express an opinion anyway, they can easily be manipulated into one opinion or another depending on the way the pollsters frame the issue.

That’s why our media polls can come up with such contradictory findings.

Realism and Public Opinion on the War

If the public appears confused now, it’s because our leaders collectively are also confused. Or put differently, there seems to be little consensus among our political leaders as to what should be done.

The New York Times conclusion is probably the most realistic: The public “is not clear on when or how the United States should leave Afghanistan.”

But if you don’t like that conclusion, feel free to look elsewhere – there’s a poll for every view.