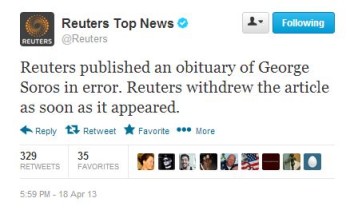 The obituary included dummy text for age and time of death, and a link to the obit now goes to an error page.  It was a “30-paragraph obituary by Todd Eastham,” Romenesko noted.

Reuters tweeted about the error and noting it has retracted the obituary. That tweet read: “Reuters published an obituary of George Soros in error. Reuters withdrew the article as soon as it appeared.”

See below a Google News search for Reuters’ obit.

iMediaEthics has written to a Soros spokesperson for comment. We’ve also asked Reuters how the error occurred. We’ll update with any response.

Just a few months ago, Der Spiegel had egg on its face after it published an obit for former president George H. W. Bush, who is still alive. Der Spiegel claimed the obit went live because of a “technical problem,” but the error also attracted attention for also being critical of Bush, calling him a “colorless politician.”

In late 2011, the Washington Post published an incomplete obit for Christopher Hitchens, as we wrote at the time.  While Hitchens HAD died, the obit contained placeholder text for information like “cause, place of death.”