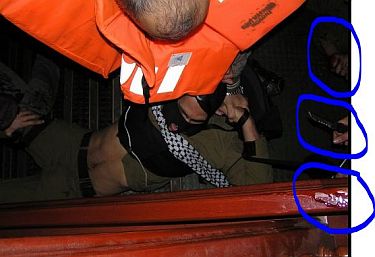 Note the three circled elements of the original photograph published by AP--weapons and blood--are cropped from the Reuters' version of the same photograph.(Credit: Little Green Footballs, with StinkyJournalism's emphasis)

Bloggers and news sites are calling out Reuters for its two cropped photos from the Mavi Marmara, the Turkish ship attacked by Israeli commandos on May 31.  As of June 14, Reuters has admitted it cropped one of the photos, but has not addressed the second photo or charges that Reuters’ crops were politically motivated.

The Mavi Marmara was supposedly carrying peaceful activists, the New York Times reported, but the photos with knives and blood present a different picture of the ship’s passengers as armed commandos – that is, when the knives and blood aren’t cropped out.

Little Green Footballs’ (LGF) Charles Johnson is credited with the find. He responded June 6 to Reuters’ defense that the cropping was inadvertent:

“That’s a very interesting way to crop the photo. Most people would consider that knife an important part of the context. There was a huge controversy over whether the activists were armed. Cropping out a knife, in a picture showing a soldier who’s apparently been stabbed, seems like a very odd editorial decision.”

LGF analyzed the first photo, which has been cropped to remove a knife, here and the second photo, which appears to have removed a pool of blood, another wounded person and a knife, here. LGF also noted that the AP used the same photo but didn’t crop it, unlike Reuters.

Israel National News wrote June 9 that LGF’s Johnson “has gained notoriety in the past for discovering journalistic lies.”  Johnson, whose site has been described as “right wing,” is credited with breaking the “Rathergate” scandal when he realized that the typefont used in CBS memo questioning former president George W. Bush’s National Guard service wasn’t available until recently, and therefore the memo was a fake.

Reuters wrote June 7 in response to comments about the photo cropping:

“The images in question were made available in Istanbul, and following normal editorial practice were prepared for dissemination which included cropping at the edges. When we realized that a dagger was inadvertently cropped from the images, Reuters immediately moved the original set, as well.

“We also used one of the uncropped photos on our reuters.com home page, and linked to a slideshow which used both full-frame knife shots: GBU Editor”

Still, the Reuters editor has not commented regarding the second photo.

Fox News identified the political group– IHH, “the Turkish-based group” that send out “the six-ship fleet that tried to break Israel’s blockade of Gaza” as the group that released the photos–not a news outlet.

Fox News reported June 8 that this is the second time Reuters has been called out for editing “politically sensitive photos in a way that casts Israel in a bad light.”

As iMediaEthics wrote Feb. 5, 2009, Reuters photographer Adnan Hajj was fired and his 900 photos removed from the Reuters archive following the outing of his altered images.

iMediaEthics also reported in 2008 when Reuters was critiqued for publishing staged photos of Palestinian lawmakers meeting by candlelight.

The Society of Professional Journalists’ code of ethics advises to “never distort the content of news photos or video. Image enhancement for technical clarity is always permissible.”