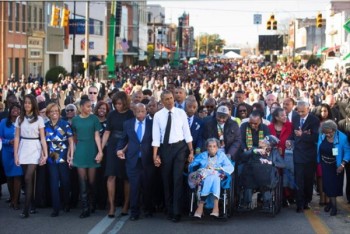 The NYTimes photo shows the Obamas but not the Bushes.

The New York Times did not crop out former president George W. Bush and his wife Laura from a photo of a commemorative march in Selma, Alabama, New York Times public editor Margaret Sullivan reported earlier this month.

Media reports show a handful of outlets still cling to the idea that the photo the Times published on its front page, above the fold, had Photoshopped out the Bushes because of political bias. Readers and “many conservative news organizations” criticized the Times in articles, social media and e-mails, Sullivan wrote.

But “there was no crop” Times photo editor Michele McNally told Sullivan. “This was the photo as we received it.”

The photographer Doug Mills told the Times, “As you can see, Bush was in the bright sunlight. I did not even send this frame because it’s very wide and super busy and Bush is super-overexposed because he was in the sun and Obama and the others are in the shade.”

He told iMediaEthics, “As I’ve explained before, the photographers had nothing to do with the placement of those walking with President Obama. As I’ve also said, I sent a number of photos that DID include President Bush. The visual impact  was very different in the photos taken with telephoto lens vs wide angle lenses.”

Sullivan said she and McNally looked at the photo Mills took of both presidents and agreed it wasn’t as good of a picture as the one the Times selected that didn’t show the Bushes. “Technically, it’s a bad picture, and he didn’t even send it,’ McNally told Sullivan, adding that the photo the Times chose had “impact” and was a better photo.

“The explanation and reasoning by Mr. Mills and Ms. McNally make sense to me,” Sullivan said.

Therefore, Times editors did not choose to exclude the Bushes from the photo, Sullivan concluded. “I see no evidence of politics in the handling or presentation of the photo,” Sullivan wrote.

iMediaEthics reviewed wire service photos of the same scene the Times published to see if there were photos showing both presidents available.

Reuters distributed a photo of the Obamas and Bushes together.

Bush is shown far away from the Obamas because there is a road divider separating the crowd and presidents. See the Reuters photo below.

Reuters’ photo of both the current president and past president shows that to include Bush in the photo, the photo would have a road divider in the middle.  (Credit: Reuters/Jonathan Ernst, screenshot, via Daily Mail)

Despite the outrage directed at the Times, falsely accusing it of cropping out the Bushes, the Times wasn’t alone in showing the Obamas and not the Bushes in photo coverage of the march.

The AP’s photo showing the Obamas and other marchers but not the Bushes, similar to the Times‘, was used by several outlets, the photographer, Mills, pointed out to iMediaEthics.  “As you can see, The Associated Press filed a similar photo to mine and it was widely used on front pages across the country,” he wrote. “The AP also sent many other photos that did not include President Bush and those were also used on front pages.”

As evidence, Mills sent five front pages that used the AP’s photo showing Obama and other marchers, but not Bush: The Tuscaloosa News, the Baltimore Sun, the Times-Picayune, the Philadelphia Inquirer and Newsday.

The Associated Press’ similar photo not showing the Bushes is below:

Like the New York Times, the AP published a photo that didn’t show the Bushes with the Obamas. (Credit: AP/ Jacquelyn Martin)

The AP also published a separate image of the Bushes.

The AP published a separate photo of the Bushes. (Credit: AP/Jacquelyn Martin)

See below two Mills’ photos, as he posted it on Twitter.

President Obama walks across The Edmund Pettus Bridge, in Selma, Alabama on the 50th anniversary of Bloody Sunday pic.twitter.com/rtIlVRgW0W

Below see other tweets about the accusations against the Times and its defense.