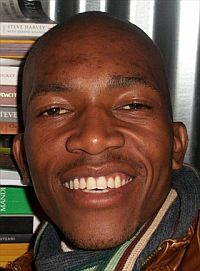 Blogger Akanyang apologized for using curse words in his letter of criticism to editors for the South Africa Sunday Times. Akanyang's apology followed his criticism of The Times use of anonymous sources for report accusing the wife of Zimbabwe's president, Robert Mugabe, of having an affair, and the president of being involved in a murder. (Credit: Akanyang)

Blogger Akanyang criticized The Sunday Times and its reporter Jon Swain in his media and politics blog, Akanyang Afrika.  He suggested they violated the South African press code in its Oct 24 story “Disgraced – Mugabe’s wife has affair with his best friend.”

The Sunday Times alleged an affair between the Zimbabwe president Robert Mugabe’s wife and the head of the country’s reserve bank, Gideon Gono.  It also accused the president of having a bodyguard murdered to cover up the affair.

The Sunday Times  based its Mugabe affair story entirely from anonymous sources. Further, the inflammatory report doesn’t state if the president, his wife or the men accused of having affairs were contacted for comment before publication.

StinkyJournalism did a count. Swain’s refernces to anonymous sources included:

The Sunday Times story also claimed that Grace Mugabe “has taken lovers before” naming two other men, but accusing Gideon Gono as the first one from “Mugabe’s inner circle”  as the news peg.

The article went on to allege that Mugabe knew about the affair and that “led to the murder to the bodyguard present at” the deathbed of his sister.  The bodyguard was named Chademana.  (Chademana died Aug. 26, 2010). The Sunday Times reported:

“CIO sources last week revealed that Chademana was poisoned under Mugabe’s instructions by Mugabe’s intelligence men, allegedly employing an undetectable poison. The instructions were carried out after Mugabe had briefed Happyton Bonyongwe, the director general of the CIO.  It was a desperate measure to keep Grace’s affair with Gono from leaking out and making a mockery of the ageing president.”

However, in response to the poison claims, Zimbabwe authorities gave Chademana’s death certificate to newspaper The Zimbabwean .

Despite the violation of privacy, Zimbabwean editors chose to publish the document as the story was of “major national importance.”

Chademana’s death certificate revealed that he died from HIV, not of “an undetectable poison.”

StinkyJournalism asked Sunday Times editor Hartley if the newspaper intended to run a correction, apology or retraction for claiming  Mugabe was implicated in a murder of Chademana, who, in fact, died from an infectious disease.

iMediaEthics also questioned if the newspaper sought comment from Mugabe, his wife or Gono before publication of their serious charges. We also asked Hartley if he’s communicated with Akanyang regarding his complaints.

iMediaEthics wrote to the South African Press Council asking if the council had any comment about the ethics involved of The Sunday Times publishing the Mugabe story.  (See StinkyJournalism’s July story on the press council and how it operates here).

As mentioned earlier, blogger Akanyang’s Oct 28 blog post about The Sunday Times‘ story, criticized the use of anonymous sources to report the Mugabe story.  He also questioned why the story didn’t note if the newspaper reached out for comment from the president, his wife or the man with whom the president’s wife was alleged to have an affair.  The blogger found that the Sunday Times’ Mugabe story violated the South African press code, which “prescribes news that is truthful, accurate, fair and balanced.”

Akanyang noted that he sent a letter to the Sunday Times editor Ray Hartley, the Times’ public editor Thebo Leshilo and the press ombudsman complaining about the story.  But, in a mysterious twist, Akanyang apologized for using curse words in his complaint.  He directed readers to this blog post, which he labels as an edited version of the letter, and gave an “unconditional apology” to the editors for using the word “crap” specifically.

But, Akanyang’s apology is even more odd given that he doesn’t explain what prompted it.  Did Times editors or his readers complain? StinkyJournalism wrote to Akanyang asking why he apologized and fell on his sword in the post, calling himself “incomprehensibly incompetent and inferior.”

“I was wrong, I admit. And unconditionally I apologise,” Akanyang wrote.

iMediaEthics has also written to the editors Hartley and Leshilo asking if they’ve had any communication with Akanyang over this post.  Leshilo responded that he would reply to our questions Nov. 1. We will update with his response and any response from Hartley.

iMediaEthics wrote earlier this month about Avusa, the parent company for The Sunday Times, the Herald, and several other news outlets in South Africa.  Avusa is developing a company-wide policy for anonymous sources after the (South African) Herald was criticized for publishing an anonymously sourced story about political rumors.

Leshilo, Avusa’s public editor, wrote in an e-mail to iMediaEthics that “Let me say upfront though: we have had a policy on sources forever. It has just been tweaked. Also, the role of public editor here is the same as in the US. Ours is actually modelled on the New York Times’.”

iMediaEthics wrote in July about South Africa’s press council, which handles complaints about print media.  See our post here.  We contacted the press office asking for comment on this story and if they will pursue any complaints against The Times. We will update with any response.