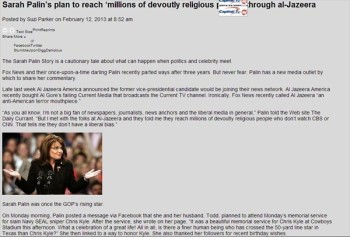 See the original version of the Washington Post's story. The information relating to Al Jazeera -- based on a satire article -- has been removed. (Credit: Washington Post, screenshot)

Shortly after Mediaite called the Washington Post out for being duped by a satire site, the Post scrubbed references to phony quotes and information claiming Sarah Palin had been hired by Al Jazeera America.

The headline of Suzi Parker’s story for the Post was also changed from “Sarah Palin’s plan to reach ‘millions of devoutly religious people’ through al-Jazeera” to “Sarah Palin tries to stay relevant.”  And the several paragraphs about Palin and Al Jazeera have now been removed.  Check out the screenshot above of those paragraphs. The Washington Post article, published Feb. 12 at 8:52 AM EST, claimed:

“Palin has a new media outlet by which to share her commentary.  Late last week Al Jazeera America announced the former vice-presidential candidate would be joining their news network.”

Further, the Washington Post cited comments Palin reportedly made to The Daily Currant, which the Post failed to note is “an English language online satirical newspaper” with a “mission…to ridicule the timid ignorance which obstructs our progress, and promote intelligence.”   In that Feb. 4 “interview,” Palin “said”

“As you all know, I’m not a big fan of newspapers, journalists, news anchors and the liberal media in general…But I met with the folks at Al-Jazeera and they told me they reach millions of devoutly religious people who don’t watch CBS or CNN. That tells me they don’t have a liberal bias.”

The Washington Post‘s correction, posted within two hours of the article’s publication at the top of the story, doesn’t indicate how central the Al Jazeera claim was to the Post‘s storyline, though. As Mediaite explained in its post on the Washington Post being tricked, the newspaper’s report “is unfortunately based on a faulty premise.”  The correction simply reads:

“CORRECTION: An earlier version of this post incorrectly reported that Sarah Palin planned to contribute to the Al Jazeera America news network.”

iMediaEthics notes that one of many clues the article wasn’t legitimate is the Daily Currant’s heinous misspelling of Al Jazeera’s name.  In the Daily Currant‘s version of the previous quote, Palin called the network “Al-JaJizzraa [sic].” But, instead of being flagged to the possibility the quote wasn’t real, the Washington Post cleaned up that misspelling and spelled the network’s name correctly.

The Daily Currant’s article reported Palin also calls caribou “kinda like the Christian version of camels” and is reported to have commented about a presidential election … next year. The Currant wrote:

“Palin denied rumors that she would use her new shows to set up a run for president in 2014, hinting that the money may have been the primary motivating factor.”

And for more questionable quotes that should have signaled the Post to the article’s satiric nature, a little further along Palin is also quoted as saying that Al Jazeera told her she “could work from my own home studio, so I wouldn’t have to fly to the Middle East and risk getting my plane hijacked or blown up.”  Adding to the obvious absurdity of the piece of satire was that “Al Gore” is quoted describing Al Jazeera as “backed by oil money.  That means when you get paid…you really get paid.”

We’ve also asked the Daily Currant for comment on the Post’s being hoaxed. We’ll update with any responses.

iMediaEthics wrote in 2011 when MSNBC’s Rachel Maddow also was duped by a satire article about Palin. In that case, Maddow reported on satire site ChristWire.org’s story “As Egypt Descends in Chaos, Should Sarah Palin Support a US-Led Invasion?” Also in 2011, US Weekly and Time magazines were duped by a satire story claiming Palin wanted Christina Aguilera deported for botching the lyrics to “The Star Spangled Banner,” as iMediaEthics wrote at the time,

Check out all of our stories on Sarah Palin.

“CORRECTION:  An earlier version of this post incorrectly reported that Sarah Palin had signed on as a contributor to the Al Jazeera America news network. The blogger cited a report on the Daily Currant Web site as the basis for that information without realizing that the piece was satirical.”