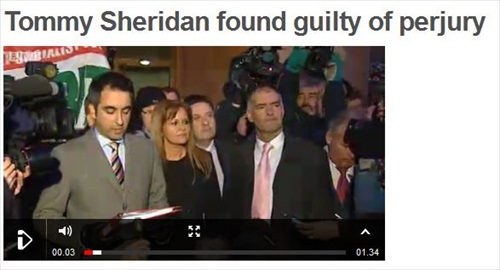 The News of the World may appeal a 2006 defamation ruling after former Scottish Parliament member Tommy Sheridan was convicted of perjury, Journalism.co.uk reported.

For the past few months, News of the World, a News Corp.-owned British daily newspaper, has been caught up in accusations of phone hacking.  Most recently, actress Sienna Miller filed a lawsuit accusing the newspaper of violating her privacy by hacking into her phone voicemail.

News of the World reportedly paid Sheridan £200,000 in 2006 as damages for its stories “about his sex life.” According to the BBC, the stories claimed Sheridan “was an adulterer who had attended a swingers’ club.”

As the Associated Press recounted, Sheridan’s 2006 suit “accused his detractors of either printing salacious gossip to drive newspaper stories or colluding with Britain’s intelligence agencies in a plot to undermine socialist politicians.”

However, a jury recently ruled that Sheridan was guilty of five of six perjury charges “relating to the defamation case.”

Breakingnewsdir.com wrote, “The jury spent almost two hours considering their verdict before being sent home for the night. The trial heard from more than a dozen witnesses who said Mr Sheridan admitted, at a meeting of the SSP on 9 November 2004, visiting a sex club.”

News of the World, one of many newspapers owned by media mogul Rupert Murdoch, said it has appealed the defamation judgment.  In a statement, the newspaper said:

“We are pleased that justice has been done and that Mr Sheridan’s perjury has been proved. As is now clear, Mr Sheridan lied to a court to secure victory when he sued the News of the World for defamation in 2006. We have an appeal lodged against that defamation verdict and we now look forward to that appeal succeeding in Scotland’s Court of Session.”

“The News of the World has a proud history of exposing the hypocrisy and lies of the powerful. Today’s verdict is a vindication of good investigative journalism. We hope and expect our successful appeal to bring an end to this matter.”

Sheridan reportedly called for an investigation into News of the World and said he had no “apologies.” Sheridan stated via his lawyer:

“For three years my wife and I have faced charges of perjury. Today, I was convicted and Gail was acquitted of any crime.

“I have fought the power of News International all my political life, and I make no apologies for taking on the might of Rupert Murdoch.

“Several million pounds of public money was spent investigating me and my wife.

“Is it not time that similar resources were devoted to investigating the activities of the News of the World?“

iMediaEthics is writing to News of the World and Sheridan for comment and will update with any response.

BBC News provides some legal details regarding this case and perjury cases emerging from civil trials. See “Should Sheridan’s perjury trial have been prosecuted?“