Should Abortion be legal in most cases? CNN & Quinnipiac Polls differ by 44 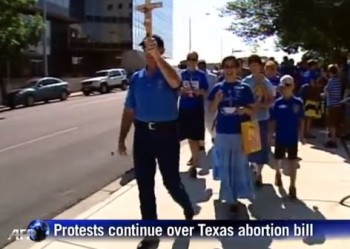 The issue of abortion has been around so long, you might think that people’s opinions are firmly set by now. But recent polls suggest that even on this issue, a slight change in question wording can produce a big change in what “public opinion” is measured.

These poll differences represent a tsunami turn-around – from a 26-point margin against abortion being available in most or all cases, to an 18-point margin in favor: a 44-point swing caused by slightly different question wording.

(Respondents who choose “legal only under certain circumstances” are then asked:) “Do you think abortion should be legal in most circumstances or only a few circumstances?”

Quinnipiac’s final categories are somewhat different from CNN’s, though they mean the same thing:

The graphed results make clear that the biggest distinction in the results comes in the middle two categories:

Which is the better way to ask the question?

CNN’s version is not as straightforward, because the categories are not symmetrical, and they are not presented to the respondent at once, but serially. There are three answers that say abortion should be legal (always, mostly and rarely), and one that says illegal (always).

Objectively speaking, one might say that “legal in only a few circumstances” is practically the same sentiment is “illegal in most cases.” Both phrases imply relatively few abortions. But apparently many people are more willing to say abortion should be legal, even if rarely, than they are to say it should be illegal most of the time.

Whenever small changes in question wording produce large changes in poll results, it’s a sure bet that many people really don’t have strong opinions on the matter. Both pollsters indicate that very few people have no opinion: CNN, 1%; Quinnipiac, 6%. But these figures, of course, are completely unrealistic, obtained by pressuring those without an opinion to express one anyway.

The net result: Many people pressured to give an opinion were influenced by the structure of the questions they were asked. Different structures, different opinions. And, as it has happened many times before, the pollsters produced results that reaffirm how untrustworthy their polls often are.