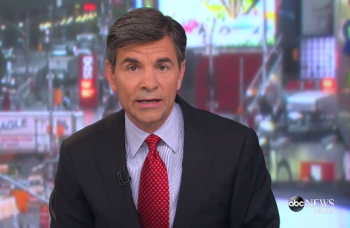 ABC News' George Stephanapoulos apologized on air Friday for his donations to the Clinton Foundation and the lack of disclosure to viewers.

In a brief statement on Good Morning America, Stephanopoulos said, according to the New York TImes, that the “donations were a matter of public record but I should have made additional disclosures on air when we covered the foundation.”

He added that “I now believe that directing personal donations to that foundation was a mistake.”

“Even though I made them strictly to support work done to stop the spread of AIDS, help children, and protect the environment in poor countries, I should have gone the extra mile to avoid even the appearance of a conflict. I apologize to all of you for failing to do that,” Stephanopoulos said.

Stephanopoulos noted that he has made “substantial donations to dozens of charities,” not just the Clinton Global Foundation.

ABC News acknowledged that Stephanopoulos’s actions broke its rules because of the lack of disclosure. “The issue here wasn’t the charitable giving,” ABC told the New York Times. “It was failing to disclose it when covering the recent reports about the foundation.”

Last month in an interview with the Daily Show‘s Jon Stewart, Stephanopoulos said of donors to the Clinton Foundation “there’s a hope that that’s going to lead to something and that’s what you have to be careful,” Mediaite reported.

Stephanopoulos, who worked for President Bill Clinton as communications director, told Politico yesterday he made the donations from 2012 to 2014, which he hadn’t disclosed previously, as iMediaEthics reported, He said he “thought that my contribution were a matter of public record’ but admitted he should have told both ABC News and viewers about the donations when reporting on the foundation.