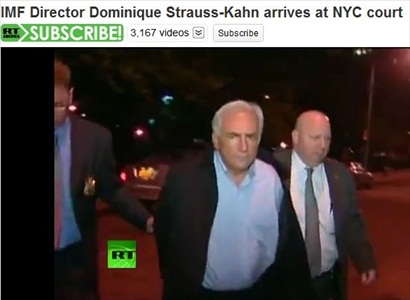 While the U.S. media determines what and how much to reveal in reporting on Arnold Schwarzenegger’s affair and its resultant child, the differences between the American and French media coverage of the charges against former International Monetary Fund head Dominique Strauss-Kahn have come to light.

Global Post described the case as an example of “the chasm between how France and America handle men, women and rape.”

The French “elite” has reportedly criticized the American media for showing images and footage of Strauss-Kahn in handcuffs, whereas the French media has named the alleged victim — a no-no in U.S. journalism ethics, according to Global Post.

The New York Times’ City Room blog noted that French media have equally been covering the allegations against Strauss-Kahn and the American media’s reporting on the case.

Global Post also noted that a variety of fake photos purported to be the woman accuser have been floating around online.  “No doubt, it’s a drama for the women depicted, and a moment of journalistic shame for certain French publications who succumbed to the temptation to publish without verifying first.”

One of the fake photos is that of a New York real estate agent with the same name.

The Wall Street Journal reported that France’s “broadcasting watchdog,” the Higher Audiovisual Council, advised “restraint” in French TV’s reporting on the Strauss-Kahn case, specifically when it comes to airing Strauss-Kahn in handcuffs.

A 2000 French law, according to the Journal, bans “images of people in handcuffs, or otherwise restrained, until they have been convicted by a court.”  If broken by media, the maximum fine is a little more than $20,000.  The law is supposed to help maintain “presumption of innocence.”

The Wall Street Journal reported that Higher Audiovisual Council board member, Rachid Arhab, claims the law includes images taken abroad; however, a council spokesperson reportedly told the Journal that “the individual, not the agency,” will be left to enforce the ban of these images.

Some French media outlets like Paris Match and Le Figaro have named the woman accusing Dominique Strauss-Kahn.  Le Figaro, for example, provided names and ages for both the woman and her daughter along with descriptions of the woman.  Notably, Le Figaro’s headline names the woman with the qualifier “the victim of the faceless DSK affair.”

Gawker-owned blog Jezebel noted that French media has reported “a variety of personal details” about the woman and rating her “attractiveness.”  For example, according to Jezebel, Paris Match reported that Strauss-Kahn’s lawyers described the woman as “very unattractive,” a taxi driver said the woman has “big boobs and beautiful buttocks,” and that another person called her “very pretty.”

Global Post reported that Le Monde “published both versions of the woman’s name, Guinean and American, in a 1,000-word profile titled ‘[first name withheld], victim without a face.'”

The Telegraph reported comments from the woman’s brother and the man who runs her building’s tenants’ association.

The Atlantic’s Goldberg questioned what “the point” is of reporting on the woman accuser’s personality:

“Rape is rape. The character of the victim is irrelevant.  There’s one caveat to this idea: If reporters had discovered in the woman’s past a pattern of making false accusations in criminal matters, well, then there’s a plausible argument that information about her character should be reported.”

Goldberg also noted that by investigating and interviewing in the alleged victim’s home area, journalists end up “publicize, in the place where she lives, her plight, and raise possibly-destructive questions about her situation.”

Poynter’s Tenore also reported that Poynter’s Julie Moos noted “by virtue of the accusation, we protect the accuser, though we do name the accused.”  Moos reportedly went on to question cases where there may not be a victim, like the John Edwards-Rielle Hunter affair.

For example, the naming of the woman involved in the Schwarzenegger affair has been debated and handled in a variety of ways because it appears the relationship was consensual.