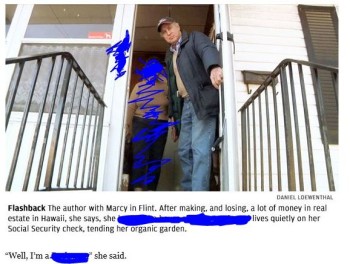 The Marcy-Bruce Porter connection over 45 years

Columbia Journalism Review reporter, Bruce Porter, feigns caring about his source, Marcy, as he exploits her through time. iMediaEthics’ latest special investigation unearths the abuses and lies over 45 years. At the end of 2013, Porter, CJR and Porter’s filmmaker friend, Daniel Loewenthal are sued by Marcy for libel, slander and invasion of privacy.   Go to full investigation into Porter’s repeated ill treatment of Marcy, a vulnerable source.
Also see story announcing lawsuit.

1967 (Oct. 30) A cover story in Newsweek sets events in motion. Journalist Bruce Porter pays a “runaway” 17-year-old Marcy from Flint, Mich., $65 for an interview about her hippie lifestyle. (Her stated age was an error; Marcy was 19 years old ). After promising not to use her name, Porter included her first name and hometown. Headlined “Gentle Marcy: A Shattering Tale,” the sensationalistic cover story details her drug use, casual sex and $200 abortion, at a time when her mother believed she was working at Macy’s in New York City. Readers are so moved they send in thousands of dollars for Marcy — who never receives the money. (Marcy told iMediaEthics she did work at Macy’s “for a month or two”).

1967 (Nov. 12, 26) In the wake of the Newsweek story, WNEW AM and FM broadcasts an interview with Marcy, including a phone call to her mother. Porter hears the WNEW interview and feels guilt and remorse. In the recording, Marcy cries to her mother that the magazine “lied” in its report. She also says she bought “clothes and shoes” with the $65 Porter paid her. WNEW’s now-deceased radio news journalist Steve Young had looked for Marcy in the East Village after reading the Newsweek story, found her, then invited her and her friends to stay at his apartment. She said she had no idea Young was a journalist.

Marcy would later tell Porter and iMediaEthics the tape was not an interview but a secret recording at Young’s apartment in 1967. Alan Walden, the news director who oversaw Young, denies Marcy’s claim, but admits Young was the only one with the youths when he taped Marcy in his home. Walden says Young told him that, on his own, gave her money after the interview.  (Marcy denied this, telling iMediaEthics, Dec. 2012, “Young never gave me any money”). The resulting radio program became so popular, it was later made into an LP and distributed to schools.

1980s-2008 Porter makes Marcy a case study, using his violation of a source’s trust and the WNEW tape as an “ethics exercise” in his Brooklyn College and Columbia University Journalism School classes.

2011 (Jan. 7) Porter decides to find Marcy, apologize and make a documentary with filmmaker Dan Loewenthal about the “reunion.” The duo arrive in Flint. They had arranged to be interviewed by the local paper, The Flint Journal, believing correctly that rehashing details about Marcy from Porter’s 1967 article would help turn up leads. That evening the Flint Journal posts an online article about Porter’s search for Marcy.

2011 (Jan. 8) Readers recognize Marcy from the article. Librarians and a man named “Moon” supply Porter with her full name. Porter and Loewenthal soon find her house and Porter apologizes to her on her front stoop, camera rolling, for violating his promise to keep her anonymous in 1967. She was shocked and upset. That night, Marcy reads the Flint Journal article and hears the linked WNEW interview for what she says is the first time. She calls Porter at his hotel, even more upset. Porter would later write: “The calamity I had once visited on her I was doing all over again. We talked for more than an hour about the situation, and she agreed to have lunch the next day and drive us around Flint.”

2011 (Jan. 9) The Jan. 7 online story runs on the front page of the Sunday Flint Journal print edition. Porter and Loewenthal leave Flint after touring the town and having lunch with Marcy.

2011 (Jan.13) Beata Mostafavi, the Flint Journal reporter who wrote the first article about Porter, calls him. Porter, in an effort he later says to protect Marcy’s identity, gives the reporter false information about Marcy. He emails Marcy to let her know another article is forthcoming despite her frustration at there having been a first one. “I tried to be vague about everything without actually lying,” he writes. “…I told her you were unhappy over the radio interview and that you didn’t feel comfortable sharing your life just now. ”

2011 (Jan. 16) The Journal follows up with another Sunday front-page story falsely stating that Porter tracked down Marcy by phone, finding her married and living in Hawaii. In truth Marcy had been living in Flint for 11 years. The online version goes up on the 17th.

2011 (Jan.16) Marcy emails Porter, angrily reminding him that many people know she lives in town after the first front-page story. “Today’s article lies about me…I am not a liar,” she writes. “I do not want to talk to any other reporter about my experiences …as we have agreed.” Within hours Porter emails Marcy back: “The article is a little garbled on the facts, but I don’t think it paints you in a bad light.” He continues: “It’s hard being accurate with people but not telling them the whole truth. I hope … that the Journal’s interest in the story will die out.”

2011 (Jan. 18) Porter emails Marcy to say the press deluge is finished: “Think it’s over now. Talk to you soon.” He’s mistaken. Marcy had called the Flint Journal upset over his lies about her whereabouts and marital status. The Journal publishes a third story, online only, detailing lies Porter told Mostafavi. That afternoon Porter responds to the reporter’s call about deception and publicly apologizes in a fourth story in the Flint Journal, saying he was only “misleading” to protect Marcy.

2011 (Jan. 19) Porter sends a private apology email to Mostafavi. “I should have done what you suggested, to tell the truth and we devise some way to deal with it,” he writes. “Instead, of course, I didn’t. … Again, I apologize for what I did and am sorry for all the grief I must have caused you at the paper. At Columbia I frequently use ethical lapses on my part as bad examples for the class to thrash out. This is probably the worst thing I’ve done, and I hope you’ll forgive me.”

2011 (Feb. 26) Marcy emails Loewenthal, the documentarian, some of her concerns about the project. “Dan…The contract is the protection I want and deserve,” she writes. “Also when you were taping me at my home my 22-year-old son witnessed my statement that you did not have my permission to use any of it. I am scared about it all and I feel justifiably.”

2011 (Mar. 11) Loewenthal tries to keep Marcy on-board with the project. “In many ways this is a film about you, but it is also a film about you and Bruce,” he emails. “Meeting you and seeing the depth of your character and the complexity of your life and the warmth and strength you possess is also compelling.”

2011 (Mar. 24) Marcy responds to Loewenthal. “Dear Dan: Still thinking….can I have final approval of whatever is said about me?” she emails. “I think they call that approval of the end cut. I don’t believe in lying but some things a person is uncomfortable about.”

2011 (Mar. 25) In yet another email, Loewenthal tries again to reassure her: “Marcy, I am sure we can work something out. …very impressed with you as a human being.”

2011 (May 27) After numerous emails and cajoling, Marcy signs a contract to gain power of final approval over the Porter/Loewenthal documentary, now in its final edits. She does so without an attorney. Marcy adds an addendum page to protect herself from surprises. The contract reads: “I also want final approval of the end cut of the film.” For her role she is paid $500 with promises for more if it materializes, and is led to believe that her clear instructions not to use her name, made with her son as a witness, would be followed.  Loewenthal told iMediaEthics, “She wants to see the final version but we have her life [story] rights.”

2012 (November) The Columbia Journalism Review publishes Porter’s article, “Lost and Found,” about his journey to Flint to find Marcy and apologize, with filmmaker in tow. No mention is made about Porter lying to The Flint Journal or about Marcy’s distress from five articles in her community. Neither Porter nor CJR fact-checkers contact Marcy or WNEW’s Alan Walden before publication; until reached by iMediaEthics, neither knew of the CJR story.

2012 (Nov. 8): Marcy learns of Porter’s Columbia Journalism Review article that reveals yet more personal information about her. Her last name, part of her address, her family name and her married name are included. Dismayed with this additional invasion, Marcy has written to Porter, Loewenthal and the CJR to protest their “lack of due diligence.” She contacts CJR editor Brent Cunningham to complain. He blows her off with one email, saying she signed a release for the documentary. She thought her “final approval” rights would protect her personal information from being published.

2012 (Nov. 28): Marcy learns that UK bands in the 1980s and 1990s edited (“sampled”) Marcy’s statements from the WNEW recording and included them into electronic songs. Her voice is recognizable.

2012 (Dec.19): Gordon issued a correction and apology after hearing from disgruntled listeners, Marcy herself and reading iMediaEthics report.

2012 (Dec.21): Katie Davis, Gordon’s The Story producer, wrote iMediaEthics, “We have taken down the episode in question and it will not be put back up on our website.”

2012 (Dec.21): In the face of iMediaEthics’ investigation and the harsh public criticism that followed, CJR editors asked Porter to respond in their behalf following a brief editor’s note. However, the “‘Lost and Found’ Follow up” online article was 30% longer than the print version. They cut Porter’s admissions about his lying to the Flint Journal without any disclosures for print version readers.

2013 (Sometime between Jan.5-13): iMediaEthics had asked CJR editors by email: “To get out of trouble there is suddenly [in the follow-up story] a second set of notes by a second undisclosed author of the 1967 Newsweek story to explain why the cat is dead in CJR 2012 but alive in the Newsweek story in 1967? How can CJR editors accept and reprint such a preposterous tale by Porter? Are you doing a correction about the cat tale?”

CJR editors responded by secretly deleting a paragraph: In the “Lost and Found’ Follow up” online article Porter wrote, “In the matter of the disappearance of her [Marcy’s] cat, apparently Paul heard one explanation and I another, and what appeared in the magazine was something of a compromise. I suspect the Newsweek factcheckers, being unable to find Marcy that night, went along.”

2013 (Mid-Oct ): iMediaEthics discovers that Dick Gordon and his producer have republished the public radio podcast of Gordon’s episode with Porter despite having promised to “ have taken down the episode in question” and that “it will not be put back up on our website.” Marcy was very upset to learn this.

2013 (Oct 31): Columbia Journalism Review, Bruce Porter and his film maker colleague, Daniel Loewenthal are sued by Marcy for collaborating “to defame Plaintiff and invade her privacy on numerous occasions causing her harm and damage to her reputation.” The case was filed today in The US District Court of The Southern District of New York. False claims and privacy violations that Porter originally made in the 1967 Newsweek article were repeated in CJR and other places over four decades according to complaint.

Also story about libel lawsuit against Porter and CJR filed by Marcy Oct 31,2013.