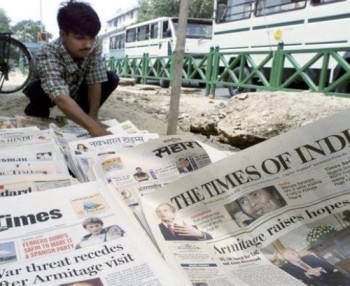 The Times of India’s new social media policy has gained some attention for going too far in restricting journalists and staff.

The Aug. 14 policy calls for all staff to give employers their social media passwords, to not post work stories on personal accounts, to create separate work accounts and to let their bosses post on their corporate pages if they want to, Quartz’s Sruthijith KK reported.

“You shall inform the company about your personal user accounts and the same will be allowed by the company, subject to you refraining from posting any news and other related material on the same,” the guidelines read in part. For work accounts, “the company shall be the owner of the access passwords, username and associated email address for the User Account, which shall be used by you on behalf of the Company to make posts,” the contract stated.

Quartz , a digital news outlet started by Atlantic Media, pointed out that bosses could even post advertising on work social accounts. “Followers will have no way of telling whether a tweet by [hypothetical employee] @PaulTOI has been posted by him or a company executive or indeed an advertiser,” Quartz reported.

Oddly, the company said in the Aug. 14 guidelines it will keep posting to work social media accounts even if it fires you.

“The company may upload news or other material on the company User Account through any means, including automated upload streams, at its sole discretion, notwithstanding any termination of your contract with the company,” the policy said.

After some negative blowback, the new guidelines were released in a “contract unveiled to employees last week” by Bennet, Coleman and Company Ltd., which owns the Times of India and the Economic Times. The reporter for Quartz, Quartz India editor Sruthijith KK, disclosed that he formerly worked for the Economic Times.

“It is now also mandatory to disclose all personal social-media accounts held by the journalist to the company” Quartz added.

Interestingly, the day after Quartz’s report on “bizarre new contract,” Times of India staffers got a new version of the contract. That version “isn’t actually changing much” beyond tweaking the contract “from legalese to plainer speak,” Quartz reported Aug. 28.

“The policy retains most of the controversial clauses, including the one that encourages employees to convert their personal social media accounts to official ones and handover passwords to the company,” Quartz reported.

The updated contract did get rid of the line that said bosses could keep posting on work social media accounts after firings and resignations.

Technology news site Giga Om commented that the policy might be the “worst such policy in the newspaper industry” and that it “misses the point” of social media.

iMediaEthics has reached out to the Times of India for comment and more information as well as to request a copy of the policy.

Is the Public Confused About Impeachment…or Decided?
Reporting on Suicide in Taiwan: New Law Restricts