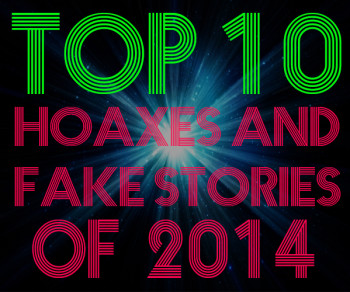 Below, check out the top ten stories iMediaEthics covered of news outlets being duped by fake or satire stories.

In April, the UK Eastern Daily Press fell for an April Fool’s Day prank claiming the Great British Banjo Company was going to build a banjo statue measuring more than 150-feet tall (50-meters) in the town of Norwich.

That joke press release claimed Oregon’s Reed College was going to divest its stocks in fossil fuels. It was timed with a speech made by the Yes Men’s Igor Vamous at Reed College’s graduation ceremonies.

The UK Sun falsely reported in June that an Arizona town was going to raze a bridge to built a “marijuana mecca.”

The Sun contained no source for its claims about the destruction of the he bridge, a tourist attraction called London Bridge, or the creation of the “centre for drug tourism” Hemped in Havasu.

The town, Lake Havasu, complained to the Sun over the reporting and earned a correction from the paper.

News outlets including Think Progress and the Daily Kos fell for a satire story from a site called KCTV7 News, which was posing as a Kansas City TV news station, claiming Michele Bachmann called for immigrant children to move into Americanization Facilities or labor camps, iMediaEthics reported this summer.

During the (fake) interview, Palin was to have said she supported the man’s “honest opinion.”

From there, Jezebel reported on the interview and later corrected after realizing it was duped by the bogus story.

Palomo was in Brazil for a comedy show where he was to impersonate Scolari.

San Diego Jewish World was duped this summer by a satire article claiming Sandra Fluke commenting she was “less concerned about the young women captured by the Boko Haram, than she is by women who must live under Republican rule.”

However, Fluke never made those comments. San Diego Jewish World fell for a fake article that traced back to satire site Duh Progressive.

Five TV morning news programs in Wisconsin and Illinois interviewed a man claiming to be Chef Keith Guerke this year.

But, Guerke isn’t a real chef. Instead, Nick Preuher, a comedian, tricked all the outlets with a fake press release touting his fake credentials. From there, Guerke was brought on the five stations to promote a fake book.

Guerke said he wasn’t trying to make a “statement…about the local news” but instead thought it would be fun to see if the shows bit on his phony release.

In October, Malaysian newspaper Utusan Malaysia fell for a satire story from World News Daily claiming a priest had a heart attack on the roof of his church, fell off the roof, landed in a coma for more than a year and then woke up deciding to convert to Islam.

iMediaEthics’ most read story this year also lands as the top hoax of the year.

Satire site the Diversity Chronicle published a story claiming Pope Francis said the Roman Catholic Church “no longer believes in a literal hell where people suffer.” The satire story went on to claim the Pope said Adam and Eve were a “fable” and Hell is a “literary device” and “metaphor.”

Diversity Chronicle also claimed Pope Francis said “all religions are true” and “our church is big enough for heterosexuals and homosexuals, for the pro-life and the pro-choice.”