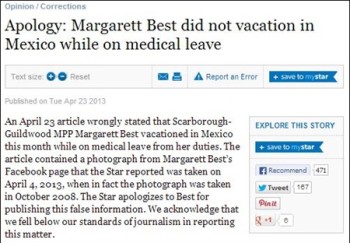 For the first time in 18 years, the Toronto Star had to run a front-page apology after wrongly saying that a politician was on vacation, Toronto Star public editor Kathy English noted in a recent column.  It was also the first time the Star ever promoted an apology on its homepage.

As the Star’s apology explained, the April 23 story accused a politician, Principal Parliament member Margarett Best, of taking sick leave to go on a vacation based on a Facebook photo.  The April 23 apology said that the article misunderstood the Facebook photo time stamp and then reported that Best had “vacation in Mexico…while on medical leave from her duties.”

“An April 23 article wrongly stated that Scarborough-Guildwood MPP Margarett Best vacationed in Mexico this month while on medical leave from her duties. The article contained a photograph from Margarett Best’s Facebook page that the Star reported was taken on April 4, 2013, when in fact the photograph was taken in October 2008. The Star apologizes to Best for publishing this false information. We acknowledge that we fell below our standards of journalism in reporting this matter.”

The article has been replaced with a “correction” noting that “this article has been removed for legal reasons,” and the Star took the article off its website.  Just as the prominent apology was unusual, unpublishing was also a rare move, English, who happens to be an expert in unpublishing, noted.  “While the Star’s policy says it rarely ‘unpublishes’ and usually only for legal reasons, the fact that this story was based on a false premise called for such action,” she explained.

English added April 26, “all information in the story suggesting she was in Mexico earlier this month is entirely wrong.”

The error was all the Star‘s fault, she said, because a Star reporter wrongly jumped to conclusions after seeing a Facebook photo and failed to fully fact check. The reporter, Richard Brennan, saw the 2008 photo recently posted to Best’s Facebook page, but he didn’t know the photo was old. Brennan saw the photo and while he did try to ask for more information, he didn’t let her know she or the Facebook picture would be the focus of the story.

“I did not live up to the level of professionalism expected of me by the Star or myself,” he told English.

However, English didn’t put the blame on Facebook, but rather the Star. “Don’t jump to the simplistic conclusion this is a Facebook fail, yet another case of the perils of social media and misinformation. People, not technology, make mistakes,” she wrote.

“Both the reporter and his editors fell far short of the Star’s standards for accuracy and fairness here in failing to take proper steps to verify a story that turned out to be largely a nonstory,” she later added.

In addition, the Star‘s deputy national editor Matt Carter confessed that the national desk “missed a layer of editing” and “should have discussed” the story, which “would almost certainly have prevented us from publishing.”

Canada has a picture of a portion of the original print story and the print version of the apology.

iMediaEthics has written to the Star’s Bruser asking for more information about the training and if Best had threatened any legal action over the inaccurate article. We’ve also reached out to Best’s lawyer seeking comment and will update with any response.

iMediaEthics wrote last month when the Star‘s English defended the newspaper’s use of anonymous sources to report on claims that the city’s mayor, Rob Ford, has a problem with alcohol.