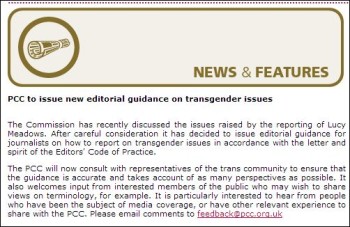 The UK Press Complaints Commission announced last week that it is working on new guidance related to “transgender issues.”

In creating this guidance, the PCC said it plans to “consult with representatives of the trans community” and invites feedback from the public at feedback@pcc.org.uk.

The PCC’s Jonathan Collett told iMediaEthics by email that the PCC hasn’t established “a formal timeline for the publication of the guidance.”

The PCC’s announcement is especially relevant because of complaints over stories about Lucy Meadows. Meadows was a schoolteacher formerly known as Nathan Upton, who had a gender re-assignment and was found dead in March, “three months after starting to live and work as a woman,” the Guardian reported.

According to Sky News, the Lancashire Police said Meadows’ body was found dead without any “suspicious circumstances,” suggesting suicide. In an email to iMediaEthics, Lancashire Police Press Office Manager Nick Evans told iMediaEthics that Meadows’ “death will be subject to a Coroner’s inquest so there isn’t any more we can say at present.”

Meadows’ decision was shared in a letter from a teacher at her school to parents that was then “leaked to the media,” and much reported on, according to the Guardian.  The PCC’s Collett didn’t offer specifics about complaints against individual news articles about Meadows. But, in general, he told iMediaEthics that more than 100 complaints were filed with the PCC “relating to various articles concerning Lucy Meadows” and that so far, “a complaint was resolved.”

And, some of that reporting has drawn criticism. For example, the Daily Mail’s columnist Richard Littlejohn’s article on Meadows, “He’s not only in the wrong body … he’s in the wrong job,” prompted a petition calling for his firing.   As of May 16, the petition had more than 40,000 signatures.

Littlejohn’s column has since been unpublished, the Guardian’s Roy Greenslade wrote, cautioning that “it is important to note that there is no clear link – indeed any link – between what Littlejohn wrote and the death of Lucy Meadows.”

UK charity Trans Media Watch called for the media to be more careful in reporting on transgender people. The group’s chairperson Jennie Kermode told the Guardian that

Trans Media Watch already offers “help for the media” on its website, advising journalists on style, “approaches to avoid,” and “common misunderstandings.” The PCC’s Collett said it will “liaise with Trans Media Watch and other community organisations” as it prepares its forthcoming guidance on transgender issues.

Earlier this year, more than 800 complaints were filed with the PCC over an Observer column on transgender people.  Julie Burchill’s January column, which has since been unpublished, called transexuals “screaming mimis,” “bed-wetters in bad wigs,” and “dicks in chicks’ clothing,” among other comments.

Despite those PCC complaints of discrimination, inaccuracies and harassment, the PCC ruled in March that Burchill’s comments didn’t violate the code because it was a single opinion piece that didn’t specifically criticize one person.

iMediaEthics has written to Trans Media Watch asking for more information and will update with any response.