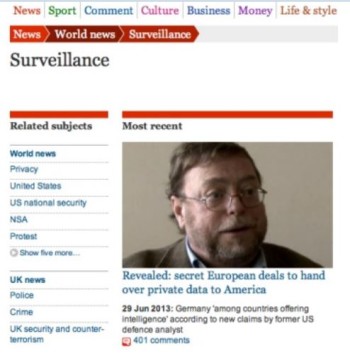 The UK Observer unpublished a story claiming there were “secret European deals to hand over private data to America.” The Observer is the Sunday sister paper to the Guardian, whose Glenn Greenwald broke the story of NSA snooping this past month.

The Observer’s story was deleted because the source for the claims listed in the Observer report, Wayne Madsen, is “highly unreliable,” according to the Telegraph. A quick Google search of Madsen’s name produces Madsen’s claims that Obama is gay, the Telegraph reported, and Talking Points Memo identified him as a “conspiracy theorist.” Further, Forbes cited an interview with Madsen claiming that 9/11 was “an operation carried out by Mossad, Saudi intelligence…and Middle East intelligence services combining their operations, and elements of the CIA.”

The Telegraph republished a portion of the Observer story, which reported that Madsen said that

“At least six European Union countries in addition to Britain have been colluding with the US over the mass harvesting of personal communications data.”

While the link to the original story says the story has been unpublished, The Observer has since re-posted the claims about the data collection, but distanced itself from Madsen. A Guardian News & Media spokesperson told iMediaEthics by email that the decision to yank the story was related to sourcing. In a statement, the spokesperson said:

“The story was withdrawn from the Observer and the Guardian website after concerns were raised about one of the sources. However, as the thrust of the story was based on the Observer‘s analysis of declassified NSA documents and a European parliament report, the key allegations were republished on the website. The Observer is confident that its interpretation of the evidence is correct – that the documents demonstrate the existence of third party agreements for EU member states to supply communications data to the NSA under arrangements that have largely escaped public scrutiny.”

According to Forbes, the Observer got the story from an interview with Madsen on The Privacy Surgeon. “The Guardian/Observer then picks this up and runs it as their story (with attribution),” Forbes wrote. Adding to the problems with the Observer story, the Daily Beast called the Observer report “a marvel of awful journalism” because the Observer didn’t interview Madsen and Madsen’s comments referred to information on the NSA website. (iMediaEthics didn’t receive a response for comment about this claim from Guardian News and Media.)

The Daily Beast further suggested that the Observer “proceeded despite knowing of Madsen’s bizarro views” because the original story said that Madsen “has been attacked for holding controversial views on espionage issues.”  Madsen’s website, Wayne Madsen Report, claims that the article in question was unpublished because “the surveillance powers are becoming uncomfortable in the sunshine.”

Poynter noted that the story was published in both print and online. An image of the Observer‘s front page issue featuring the story in question is published on Little Green Footballs.

iMediaEthics has written to the Observer‘s readers editor asking if he will be addressing this case in a column. We’ll update with any response.