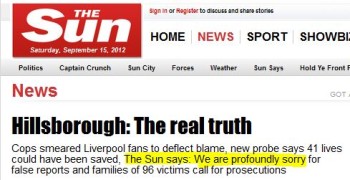 The UK News Corp.-owned Sun published an apology on Sept. 13 for its 1989 reporting on “the Hillsborough disaster,” which Yahoo News identified as “Britain’s deadliest sporting disaster” where “ninety-six Liverpool supporters died in a crush.”

In a report on the “the real truth behind the Hillsborough disaster,” the Sun said it was “deeply ashamed and profoundly sorry” for a headline labeling “the police’s version of events” as “The Truth.” As the Sun explained, a new “independent report” into the incident “showed police tried to cover up catastrophic failings by disgracefully smearing Liverpool football fans, pinning the blame on them and falsifying reports.”  The report said that “There were clear operational failures in response to the disaster and in its aftermath there were strenuous attempts to deflect the blame onto the fans.”

The Sun also published a video statement from its editor Dominic Mohan in which Mohan apologized for its “inaccurate and offensive story,” saying in part:

“Twenty-three years ago the Sun newspaper made a terrible mistake. We published an inaccurate and offensive story about the events at Hillsborough. We said it was the truth. It wasn’t.

“The Hillsborough Independent Panel has now established what really happened that day. It’s an appalling story and at the heart are the police’s attempts to smear Liverpool fans. It’s a version of events that 23 years ago the sun went along with and for that we’re deeply ashamed and profoundly sorry.”

Also, Kelvin MacKenzie apologized for the headline, according to the Guardian. MacKenzie was “editor of the Sun at the time of the Hillsborough disaster” and is quoted as saying the headline was “published in good faith and I am so sorry that it was so wrong.”  MacKenzie also said he was “totally misled” and “had absolutely no reason to believe that these authority figures would lie and deceive over such a disaster.”

The Guardian noted that the 1989 headline “led to a mass boycott of the paper on Merseyside.”

UK Prime Minister David Cameron, who also apologized, commented that “The Sun’s report sensationalised these allegations under a banner headline ‘The Truth’. This was clearly wrong and caused huge offence, distress and hurt.”

We are writing to the Sun for further comment and will update with any response.

UPDATE: 9/17/2012 10:35 AM EST: News International’s Daisy Dunlop responded to our inquiry, pointing us to the Sun’s “editorial leader” from Sept. 14.  That post, “We are sorry for our gravest error,” reads in part that “we unreservedly apologise” and “we failed.”