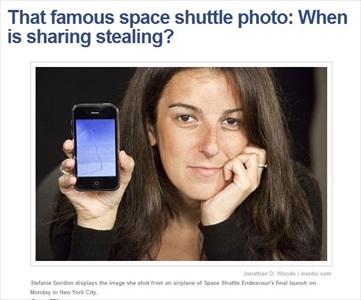 MSNBC wondered "When is sharing stealing?" in its discussion about social networks and newsworthy photos. (Credit: MSNBC (Jonathan Woods/MSNBC), screenshot,

MSNBC reported on the ethical and legal debate related to sharing photos on social networks. Should news outlets pay for newsworthy photos found on Twitter? Do they have to credit the photographer? MSNBC also wondered: “Can intellectual property rights survive” in the age of social network sharing and republishing?

MSNBC highlighted the case of Stefanie Gordon, whose photo of the Endeavor space shuttle  has been “viewed nearly 1 million times, and shown by media TV, Web and print news outlets around the world” and Janis Krums, who in 2009 took the photo of the Hudson River plane landing.

Only five news outlets, including MSNBC,  have paid Gordon for the use of her photo, according to MSNBC.  Gordon has given other news outlets the OK to use her photo for free, MSNBC reported, but noted that “plenty of other outlets” published her photo without asking for her OK and “some” didn’t credit her.

Gordon reportedly told Mashable that she “told every news organization that contacted me, ‘as long as you credit me and spell my name right, you can use it.'”  But, Twitpic’s terms of service don’t require anyone to give her credit, according to Mashable.

According to Mashable, Gordon was paid $100 by the Washington Post and St. Petersburg Times for the “rights to print each photo” and the Associated Press paid her “$500 plus royalties for each photo.”

Gordon blogged about the photo going viral and noting that her Twitter followers have multiplied from “just about 1,800” on May 16  to “over 5,400” on May 18.

According to MSNBC, Krums “earned virtually nothing from his famous photo, which was copied and used by both commercial and private publications around the world.”

“Organizations say, ‘Well, it’s a regular person we don’t even have to compensate them.’ They do things they wouldn’t do with a professional photographer.”

MSNBC argued that it’s unlikely any money could be made for using or sharing photos on social networking, but “commercial outlets that sell a product using images and videos” should be paying for those images and videos.

But, according to MSNBC, the copyright holder has to “file a copyright claim and demand payment”

“Photographers who want to exert their rights will have a much easier time if they file paperwork with the U.S. Copyright Office. They have 90 days to do so, and the rights are retroactive to first publication. That means someone like Gordon could decide to pursue legal action for up to three months after her 15 minutes of fame subside.

Exceptions to copyright law include “fair use” protection, MSNBC noted. Fair use protections are currently being debated in the Righthaven copyright protection lawsuits filed on behalf of Denver Post and Las Vegas Review-Journal content.

Some photo-sharing services include terms that grant the service a right to the photo as well. TwitPic is a sharing service that lets users post photos to Twitter. According to MSNBC:

“Currently, Twitpic’s terms of service informs users that the firm has the right to resell any images loaded by original rights holders onto its servers. In other words, Gordon has the right to sell her Space Shuttle picture, but TwitPic does now, too.”

The New York Times’ “Gadgetwise” blog reported last week that TwitPic signed “an exclusive partnership with World Entertainment News Network” granting W.E.N.N. the right to make money off photos posted on TwitPic.  According to the Times, W.E.N.N.’s “chief executive said he was only interested in photos posted by celebrity Twitter users.”

The Times reported that Twitter photo sharing service yfrog is an alternative because yfrog’s parent company’s terms of service promise it won’t “sell or distribute your content to third parties or affiliates without your permission.”

iMediaEthics is writing to Gordon and Krums for comment and will update with any response.