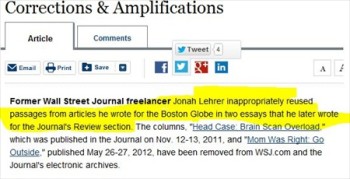 The Wall Street Journal unpublished two articles by Jonah Lehrer that “inappropriately reused passages from articles he wrote for the Boston Globe,” according to the Journal’s corrections page.   The two articles in question, from November 2011 and May 2012, are now replaced each with a “notice to readers” explaining the article was taken down.

We wrote to the Wall Street Journal asking what prompted the corrections and for more information about any review of Lehrer’s work.  Sara Blask from Dow Jones told iMediaEthics by email that:

“We have examined all of Mr. Lehrer’s pieces. We ran corrections on two of his pieces and have removed two stories from WSJ.com and the Journal’s electronic archives.”

The Washington Post’s Erik Wemple, who pointed to the correction noting unpublishing in a Sept. 14 post, argued that the numerous “revelations of plagiarism and journalistic malpractice” indicate “nothing housed under the byline of Jonah Lehrer can be trusted.”  Further, Wemple called for a literal red flag on Lehrer’s remaining online articles to warn readers. He wrote:

“Some visual — perhaps the red Ghostbusters circle — must drape Lehrer’s work on any site that continues to host it. Something foreboding, signaling that what you’re reading carries a high likelihood of corruption.”

As we’ve written this summer, Lehrer resigned from The New Yorker and was fired by Wired after several journalism ethics issues. In June, The New Yorker added editor’s notes to his blog posts to disclose that he had re-used content from previous work in his blog posts without disclosure.  In another case, The New Yorker added an editor’s note to reflect that Lehrer had used quotes and information from Technology Review as if the information had been told to him.   Lehrer resigned from The New Yorker in late July when Tablet magazine revealed that his book Imagine included fake quotes.  Poynter noted last month that Tablet’s Michael C. Moynihan said he also “found fake interviews, quotes that can’t be located, and plagiarism” in a further review of Imagine.

And, on Aug. 31, NYU journalism professor Charles Seife reported that his review of some of Lehrer’s work for Wired found plagiarism, self-plagiarism, errors, and more.   Because of that review, Wired fired Lehrer for “violations of editorial standards.”