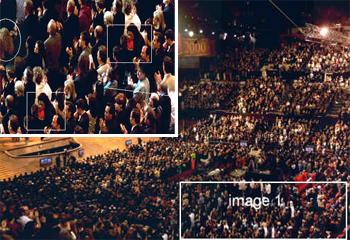 Arnaldo Lerma magnifies the above photo of a December 28, 1999 Scientology event at the Los Angeles Sports Arena. He quickly discovers the image shows evidence of Photoshop "cloning." In the cloning technique, details in one area of a photo are copied and then repeatedly pasted in another area to fill space. In this photo above, the cloning was used to copy individuals (see woman right of red patch)and repeatedly paste them to expand the audience.

The Washington Post reports January 2000 that a fake photo indicates that Scientology’s big December 28, 1999 ” millennial celebration of Scientology’s first 50 years” apparently did not have the giant audience in attendance that they claimed.

Lloyd Grove writes that Scientology critic and former member, Arnaldo Lerma, discovered the panoramic color photo Scientology PR representatives made available to the press on their web site was a poorly doctored image.

The tip-off for Lerma, he told imediaethics by email, was the repetition of copied and pasted figures. The photo alterations that expanded the audience comprised such bad Photoshop work that a man with no head was a repeated crowd filler.

Lerma explained, “I found them [the doctored images] on Scientology’s site, and at the time there wasn’t DSL, and downloaded the 8 to 14 meg images and zoomed in.. the rest is history and then I called the Washington Post, who ran a short article about Scientology’s Photoshop efforts.”

He continued, “As soon as I found two things – A black girl with a red scarf who was repeated 6 times (I stopped counting) and then the Man with no head, I alerted my friends worldwide on a private IRC chat channel, and I got help from activists in Italy, France, Sweden and UK, and Germany to find the rest of the bloopers [in the photos].”

Richard Leiby who did research for the Wash Post report “asked church spokeswoman Janet Weiland for an explanation, she said there was no intent to inflate the head count. ‘That was just a goof when they put it up on the Web’,- she said, ‘ It was later corrected.’ She maintained that the celebration was ‘absolutely packed…there wasn’t an empty seat.’ ”

The Photoshop fakery, according to Lerma, made the evening news early January 2000. Later, the Wash Post story “was picked up by Liberti  the French weekly and was front page in Danish and Swedish papers and a couple others in the USA.”

The “Man with no head” went from Photoshop “cloning” error to repeated news headline.