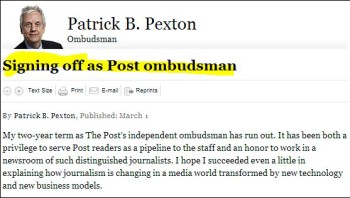 As iMediaEthics wrote yesterday, the Washington Post announced the newspaper was replacing its ombudsman position with a readers representative. Notably, instead of being independent, the readers representative will be a Post employee, the announcement from Post publisher Katharine Weymouth revealed.

The Washington Post’s Paul Farhi reported last night more details about the new readers representative position.  According to Farhi, the readers rep will be a full-time position and “will report to” Post editorial page editor Fred Hiatt. Hiatt also told Farhi that the ombudsman job wasn’t eliminated solely because of money but instead because “the media world has changed.” Hiatt is quoted as saying:

“Is having an ombudsman under a two-year contract writing a weekly column serving the purpose of responding to reader complaints and questions? Accountability is important, too.”

For his part, Pexton ended his term with a final column, published March 1.  On that closing note, Pexton recommended that the Post to adopt a real-name commenting policy, praised copy editors, thanked Post executives and editors, and called for journalists to be responsible with “the power of truth.” Pexton didn’t address the decision to replace the position with a readers representative, but had, as iMediaEthics has written, sent warning signs that the ombudsman role was in danger.

NPR ombudsman, Edward Schumacher-Matos, did weigh in on the news, criticizing the Post‘s decision, describing the new position as “what sounds like a customer relations person.” Schumacher-Matos explained:

“What was clear from the announcement was that this new reader representative will not be an independent outsider protected by contract, as most ombudsmen are, and apparently will not do her or his own investigations. Rather, like a customer relations person, she or he will take in complaints and get responses from editors, reporters and executives.”

Schumacher-Matos further commented on the decision writing that the Post’s decision to axe the ombudsman “eliminated a position that builds audience trust precisely at a time that this fundamental and fickle quality — trust — in the Post and all American news media is declining.”

Explaining the importance of the ombudsman job, Schumacher-Matos argued that the ombudsman helps accountability in a way readers and online critics can’t by looking into and handling reader complaints exclusively for one publication.  He added:

“There is no way, however, for editors and publishers to ignore regular reports by their own independent ombudsman who has done the research and talked to you or your staff (some of whom confidentially may have been the source of the original complaint).”

Further, citing studies on the public’s confidence in the media as well as the Leveson Inquiry into the UK media, Schumacher-Matos highlighted “a need for independent ombudsmen not just to build trust, but also to help news organizations maintain exacting news standards.”