Where The Antelope DON’T Play: Fake Photo on Chinese Website 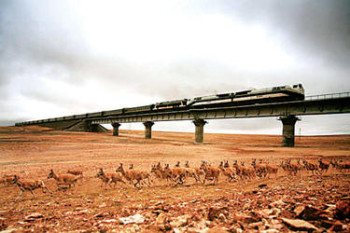 A week before the world’s highest and most controversial railroad officially opened in July 2006, connecting China to Tibet, a photograph showed a herd of Tibetan antelopes — an endangered species — undisturbed by the roaring train overhead. Titled “Qinghai-Tibet railway opening green passageway for wild animals,” the picture was cited as one of the 10 most impressive news photos of 2006 in a contest sponsored by Chinese Central Television.

It takes a particularly brazen and effective state-controlled media to turn the construction of a high-speed railroad into an environmental triumph.

Small wonder that China ranked 163rd on the most recent Annual World Press Freedom Index published by the independent organization, Reporters Without Borders. That position made the country sixth worst in brutally censoring its press, narrowly edging ahead of such countries as Burma, Cuba, Turkmenistan, and North Korea. (By contrast, the United States of America fell 53rd on the same list.)

For this reason, Associated Press ran the headline “Fake reports have been common in Chinese media,” which (officially) prompted the government to announce a crackdown on “false news” last summer.  However, Human Rights Watch interpreted the action as an attempt to stifle news that does not toe the Chinese government’s official line.

Eighteen months later, some six million people have traveled on the railroad, the Tibetan antelopes remain officially endangered, and the photographer has confessed on a Chinese photography Web site that his picture was a fabrication.

According to the Wall Street Journal, a user on the Chinese photography web forum Xitec.com discovered the fabrication, noting that a red line separating what used to be two pictures emerged after magnifying the photo several times.  Others on the message board observed that the antelopes were strangely calm in the presence of a moving train.

Daqing Evening News photographer Liu Weiqing resigned his position after he admitted that he had put two photographs together. “I have no reason to continue my sacred career as a newsman,” he said in a statement reported by Reuters. “I am not qualified for the job.”  According to the same article, the newspaper’s chief editor Wang Zhongyi resigned shortly afterwards.

Strangely, China Daily‘s editorial about their resignation suggested that the photographer fabricated the picture because he was “an activist for the protection of Tibetan antelope.” That is to say, we are asked to believe that out of concern for the endangered animal, he doctored a photograph to beautify a large construction project that encroaches upon the creature’s native habitat.

In fact, the same paper pointed out in a different article that the railroad poses an environmental threat through sound pollution. “Zoologists said Tibetan antelopes are easily disturbed by even the slightest sound,” reported China Daily.

Reuters, AP, and other international outlets reported that the construction of the train was “controversial,” but did not analyze that the obvious reasons why. Motives for faking a photo can vary, and in this instance, a more likely explanation for the fabrication than environmental concern is China’s controversial occupation of Tibet. Chinese Nationalist party founder Sun Yat-Sen conceived of the idea for the railway in 1912, and it has come up with consistent opposition from Tibetan nationalists since then. Opponents charge that the train is not commercially viable, and has only been built to maintain political control over the region. China has engaged in repeated human rights abuses and U.N. resolution violations in Tibet, and recently passed a law outlawing reincarnation without authorization, a move which would criminalize the ordination of the next Dalai Lama.

As discovered by ImageThief, the PRC government is not going to let the photographer’s admission of a hoax stand in the way of a good PR coup. After all, a Tibetan antelope named “YingYing” is one of the official mascots of the 2008 Olympics in Beijing, and the homepage of the games explains, “The selection of the Tibetan Antelope reflects Beijing’s commitment to a Green Olympics.”  The Chinese Embassy of the United Kingdom, which serves Great Britain and Northern Ireland, still features the picture prominently on its webpage, and the caption hails the “33 special passages” that make the train environmentally sound for the “National Nature Reserves such as Hoh Xil and Qiangtang” that it runs across. StinkyJournalism plans to call the Chinese Embassy and ask to have the photo removed.

This is actually the second time a photo of wildlife has been faked for what critics suggest are political reasons. The same Reuters article also reported that the Shaanxi Forestry Department awarded farmer Zhou Zhenglong a cash prize for having photographed a South China tiger, long feared to be extinct.

Internet debunkings circulated proposing methods for how the photo was faked, and the department apologized for publishing the picture without verification. However, the man who shot the picture maintains that it was authentic.

The Reuters article did not mention that the four-month old controversy lives on in China. Critics allege that the fake photo was meant to bolster tourism. The next time respected international news outlets receive photographs of endangered animals from the People’s Republic of China, they would be wise to consider the political motivations of the picture’s release before publishing.

I contacted press counsellor Zhao Shangsen at the Chinese Embassy in London to ask him to take down the photo. When he asked which one, I described the train to Lhasa, and the herd of antelope roaming past it, apparently undisturbed.

“The fake photo?” he asked.

“I didn’t know that,” he stated. “So you are suggesting that we take it off?”

“Okay. Okay. It’s a good idea… I’ll make sure the technician will be able to do that.”

Where The Antelope DON’T Play: Fake Photo on Chinese Website