Where's the Video? Donors Gave $200K to Gawker's Crackstarter Campaign to B 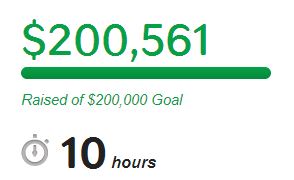 With 11 hours to go, Gawker has hit its $200,000 goal to raise money to buy a video that allegedly shows Toronto Mayor Rob Ford smoking crack. But is Gawker donating the $200K to charity if it doesn’t come up with the video instead of refunding the money in order to avoid having to cough up an $8,000 IndieGogo fee?

IndieGogo charges a 4% “fee on any money that is raised.”

What are donors going to say if there is no video and they don’t get their money back?  Donors, please let us know what you think of all this in the comments section.

As iMediaEthics wrote earlier, Gawker started the IndieGogo crowd-sourcing campaign to buy a video its editor, John Cook, said he saw earlier this month in Toronto.  The video allegedly shows the city’s mayor smoking crack. In response to Gawker’s report and the Toronto Star’s article about the video, Ford said last week, “I do not use crack cocaine, nor am I an addict of crack cocaine.” Meanwhile, Ford’s press secretary and deputy press secretary quit today, and last week, Ford fired chief if staff Mark Towhey.

Gawker cautioned donors in updates this morning and a few days ago that it hasn’t been able to get in touch with the person who has the video, and that it likely won’t be able to actually buy the video. Previously, Gawker has said it will donate the money to charity if it can’t actually seal the deal and get the video.