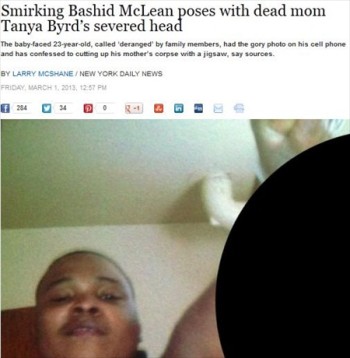 Two New York newspapers published a “stomach-turning photo” of Bashid Mclean, a New York man who is accused of dismembering his mother. In the photograph, Mclean is mugging for the camera and holding the head of his mother, Tanya Byrd.

McLean has been charged this week “with second-degree murder and two felonies related to the improper disposal of her body,” according to the New York Times.

While both the New York Daily News and New York Post attempt to censor the graphic nature of the photo by putting a black circle over where Mclean’s head is reportedly pictured, neither paper revealed where it got the photo through a credit line or sourcing. Because the newspapers have placed a black censor marking where Mclean’s head allegedly is, iMediaEthics is relying on the confirmation by the New York Police Department that the uncensored photo actually shows Byrd’s head.  The Daily News ran the picture first, tagging it an “exclusive” on March 1.

The New York Post’s article suggested that a “law-enforcement” person verified the photo as real and as one of “several gruesome photos found on his cellphone.”  The Daily News explained the photo “was discovered by police on McLean’s cell phone.”

However, the NYPD told iMediaEthics it “definitely” didn’t give the photo to the media, and that it is looking into how the two newspapers obtained the sensational photo.

When asked where the photo came from, NYPD Deputy Commissioner of Public Information Paul Browne told iMediaEthics by phone, “We are investigating.”

“It’s being investigated to determine whether it was a police source in which case there would be disciplinary action,” Browne explained.

“The photo you inquired about was not released to the media by the NYPD.  An investigation has been initiated by the NYPD’s  Internal Affairs Bureau into how the photo was obtained by the media.”

iMediaEthics wrote to Larry McShane, author of the Daily News story, for more information about where the photo came from. We asked if any credit line will be added to the story and how the photo was verified. Also of concern, was who added the black circle to the photo – the Daily News or the source? McShane told us by email:

He added that the Daily News “blacked out the head before running it.”

On a sidenote, both the Post and Daily News made errors in their stories. The Post misspelled Mclean’s name as “Bahsid” and the Daily  News misspelled Byrd’s last name in a photo caption as “Byr.” Check out screenshots below.

The gruesome and unauthorized photo of Mclean has since made its way to the Huffington Post and the Daily Mail.

iMediaEthics has written to the Post asking where they obtained the photo and will update with any responses.

EDITOR’S NOTE: 3/5/2013 12:51 PM ET: The NYPD told iMediaEthics Bashid Mclean’s last name is spelled with a lower-case “l” — Mclean, not McLean. iMediaEthics has updated this story to reflect that style.