Who is Howie Felterbush? How did he hoax 14 Gannett news outlets after the 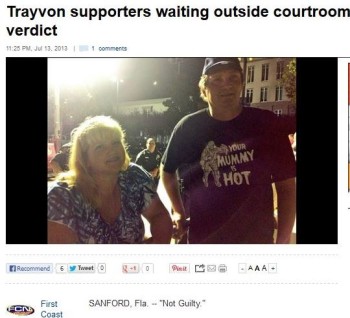 First Coast News published an image of "Howie Felterbush" and his "wife Cindy."

Who is the prankster that fooled more than a dozen Gannett-owned media properties this summer following the George Zimmerman verdict? USA Today, Florida’s First Coast News, Florida Today, WXIA and The Statesman Journal all quoted “Howie Felterbush” (say the name aloud to get the childish humor, pronounced how-he-felt-her-bush) commenting outside the courthouse of Zimmerman’s trial.

iMediaEthics’ exclusive report provides the backstory for how so many outlets got tricked into publishing quotes from “Howie.” Here’s what iMediaEthics has found out.

A man hanging around in the aftermath of the George Zimmerman trial was interviewed by two Gannett-owned outlets looking for man-on-the-street comments at the courthouse following the shooter’s acquittal. He said his name was “Howie Felterbush.” From there, 12 other Gannett outlets re-published Felterbush’s comments and his bogus name spread like a virus across the Internet.

Florida Today executive editor Bob Stover told iMediaEthics by e-mail that the person who identified himself as Howie Felterbush was “an observer in the crowd outside the courtroom.” We asked if Florida Today got any identifying or contact information for the source, but Stover said “in those circumstances you don’t normally ask for proof of identification.”

The Gannett-owned daily newspaper based in Melbourne, Florida, has since deleted any reference to Felterbush from its live blog. But, we captured a screenshot from the Google Cache of the story. See it below.

“Florida Today does not typically produce corrections as addendum on the Web,” Stover wrote. “We correct the record – much as we would in an update of any story where the information c hanges. Under some circumstances we would actually write about an error if the incorrect information had an impact on the story, but that was certainly not the case with this prank.”

Stover added that USA Today alerted Florida Today to the hoax name. “Someone at USA Today noticed the name and raised it as a likely fabrication apparently because they had seen or heard it used before,” he wrote. “We had not, so it slipped by the reporter who was working quickly to get information for the blog.”

“But others expressed relief. ‘Justice was served,’ said Howie Felterbush, a George Zimmerman supporter visiting from Melbourne. His wife Cindy agreed. ‘The jury had a difficult job, but no, you never know how these things are going to turn out.’ “

But, a Google Cached version of the story, proving that First Coast News quoted Felterbush, is available.

See above a screenshot of First Coast News’ report with the Felterbush comments.

After speaking with iMediaEthics during interviews for this story, First Coast News added an “editor’s note” to the top of its article disclosing that it wasn’t sure about Felterbush. That editor’s note reads: “Editor’s Note:  Earlier, this story included a comment from a source whose name could not be verified.”

First Coast News Got a Picture of Howie Felterbush, He and his Wife ‘Seemed Credible Enough’

While Florida Today said in its story that Felterbush wouldn’t agree to be interviewed on camera, First Coast News managed to get a picture of him. iMediaEthics called First Coast News to verify that it took a photo of someone who claimed to be Felterbush and his wife. However, within minutes, First Coast News deleted the article and picture. There wasn’t any caption for the image but the tag on the JPEG was titled “Felterbush.”

Maybe someone at First Coast News should have noticed that Felterbush is wearing a T-shirt that says “Your Mummy is Hot” next to an image of a mummy. (Credit: First Coast News, screenshot detail)

Anne Schindler, First Coast News‘ Executive Producer, Special Projects, told iMediaEthics by phone that she interviewed Felterbush and the woman identifying herself as his wife. Schindler said that the pair were some of the last people handing around and that in general, “a lot of the media were getting the same people” to interview. But, she said other media reporters weren’t interviewing the pair at the same time as she was. “There were tons of media all feeding on the same bunch of people,” she said. “There was no one else around when I was talking to them.”

“Maybe I need a 7th grader to approve my copy — to pick up on the boner jokes. I missed it.” – Anne Schindler, First Coast News‘ Executive Producer, Special Projects

Schindler continued, “They actually both seemed like fairly reasonable people. I feel like I got Bart Simpson. I honestly didn’t notice. I feel like maybe I need a 7th grader to approve my copy — to pick up on the boner jokes. I missed it.” Further, Schindler noted that the comments the couple made weren’t that flashy. “Their comments were very specific,” she explained. “They didn’t seem like gotcha kind of comments. They were being honest about their feelings about the case.”

Schindler said it seemed like they had a real reason for not wanting a video-recorded interview because of the post-verdict environment. The pair didn’t raise any red flags, she said: “Things at that time were kind of hot. They didn’t want to be the center of a bunch of cameras giving an interview about it. They seemed credible enough. They did not seem like jokesters.” While Schindler told us she asked them for their names and phone number, she didn’t realize she was being tricked with what she said was “clearly a punked name.”

“I did not get it. It was not an obvious one to me,” she said. “It’s not even that good of a joke.” iMediaEthics called the phone numbers “Felterbush” provided Schindler, but the numbers were non-working, out-of-service numbers.

‘Were you Punked or Not?‘

“Well, we don’t know, right,” Land responded, admitting that “we’re just not sure about the validity and so we’re better off not having it up.” We asked him to rethink his answer in light of the fact that both phone numbers First Coast News had recorded for Felterbush were fake.

Land pointed out to iMediaEthics that First Coast News had found multiple USA listings for people with the last name of “Felterbush,” suggesting perhaps the name was legitimate. We did a simple quick search of similar directories that are not very reliable. iMediaEthics quickly found three online listings with names spelled similarly to Felterbush, but none were close to the Zimmerman source — Howie Felterbush, who said he was from Melbourne, Florida. The man depicted in First Coast News‘ photograph is much older than 25 years old.

The listings we found in the U.S. for Felterbush were:

iMediaEthics also conducted a more accurate public records search for anyone with the last name of “Felterbush.” The results turned up zero. Our librarian advised that the results we originally obtained online were in the “sponsored section” so we were likely faked by bots catering to our search terms. See our public records search results below:

Florida Today’s article on the reactions to the verdict — including Felterbush’s feelings on the matter — was later re-published by USA Today, which as iMediaEthics reported previously, quickly scrubbed any reference to “Felterbush.” An editor’s note was appended to confess it couldn’t confirm that his name was real.

Jeremy Gaines, VP of Corporate Communications at Gannett, told iMediaEthics by email: “We removed the quote from the original article once we realized that the name of the source fabricated his name.  We will use this to review our policies and practices and always strive to provide our readers with accurate information.”

iMediaEthics’ review on July 29 of the twelve re-publications of Florida Today’s article found inconsistency, unpublishing, scrubbing and one transparent editor’s note. Here’s what we found:

iMediaEthics’ review of 12 Gannett outlets showed inconsistency in removing or correcting the comments made by “Felterbush.” (Graphic by Hanqing Chen.)

Eight of the publications —The Tennessean, the Clarion Ledger, Clinton News, the Hattiesburg American, Reno Gazette-Journal, The Leaf Chronicle, WXIA and the Daily Journal. — deleted any reference to Felterbush’s name. They made no disclosure of this. And while they deleted Felterbush’s name, they didn’t delete all of his comments and left in the story one paragraph paraphrasing Felterbush’s comments. Readers were left inferring that the last paragraph was referring to comments made by a man name William Memola, who was the last named source referenced. See the original version of the article compared with the July 29 version, edited to delete reference to Felterbush without disclosure.

Check out below a screenshot of the original article featuring Felterbush’s comments. iMediaEthics has used highlight to show what the eight outlets deleted to cover up the Felterbush error.

Eight Gannett outlets deleted the highlighted information above to seemingly cover up being hoaxed by “Howie Felterbush.” But, by doing so, it ended up making it look like William Memola, who had been interviewed previously, made some of “Felterbush’s” comments.

“As far as I know from looking into our online publishing system information, the wire story you’re referring to was replaced by an updated story. I don’t know why the article was deleted, and I received no notification instructing me to do so.”

iMediaEthics asked Gannett’s Gaines about the ways Gannett outlets handled the Felterbush hoax. We asked how Gannett shares articles among its publications, how Gannett distributes corrections among its outlets, and if Gannett would have all of the outlets that published Felterbush’s comments post editor’s note to disclose that the source wasn’t verifiable.

Gaines wouldn’t answer our questions, instead writing “I’m not going to have anything beyond the statement I gave you earlier.” On the other hand, Florida Today executive editor Stover broke it down to iMediaEthics how its content gets to Gannett.

“We share content all the time with Gannett properties, usually going through USAT or the news service formerly known as Content One,” Stover wrote. He explained, “When an error occurs, the error notification goes through the same distribution so anyone who received the material would be alerted to the error.”

“For more serious errors, emails are also sent to top editors to ensure the mistakes are corrected. I do not believe this prank reached that level.”