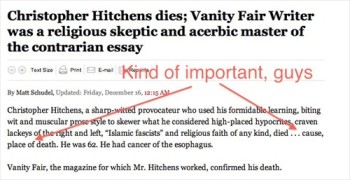 Whoops?  The Washington Post apparently jumped the gun on its Dec. 16 obituary for writer Christopher Hitchens and published an obituary with dummy key words in place of the facts, J-School Buzz reported.  J-School Buzz identifies itself as “a student-run blog about the Missouri School of Journalism that publishes content without prior review from journalism school faculty.”

The obituary opened with “Christopher Hitchens, a sharp-witted provocateur who used his formidable learning, biting wit and muscular prose style to skewer what he considered high-placed hypocrites, craven lackeys of the right and left, “Islamic fascists” and religious faith of any kind, died … cause, place of death. He was 62. He had cancer of the esophagus.”  This is the obituary in question.

According to JSchoolBuzz, the Washington Post has fixed the article to reflect that Hitchens died “Dec. 15 at a hospital in Houston,” but indicated that since it was published on both the Washington Post’s Facebook and Twitter, “it was presumably copy-edited.”

JSchoolBuzz commented  that “If you are going to write someone’s obituary before they die (which is standard practice!), you should probably fill in key details like ’cause, place of death’ of the deceased before you hit publish.”

iMediaEthics wrote to the Washington Post’s public editor Patrick Pexton asking more about this error and if the newspaper will be adding an explanatory note to the obituary. Pexton told us he’s looking into the matter and will let us know when he is able to provide more information about the matter.

The Poynter Institute corrected its post on news outlets’ Hitchens coverage this morning.  In a post  originally titled “New York Times stops the presses for Christopher Hitchens obit,” Poynter reported that the New York Times had “stopped the presses to accomodate Hitchens’ obituary, but that was incorrect,” the correction reads.

UPDATE: 12/16/2011 6:29 PM EST: Washington Post ombudsman Patrick Pexton sent us an e-mail explaining the error.  Pexton wrote to iMediaEthics “I’m told that the error was corrected within three minutes. The obit had been updated with the cause and place of death, but the updates did not register in Methode, the content management system that publishes online. Because it was caught so quickly, no online note or correction was posted.”