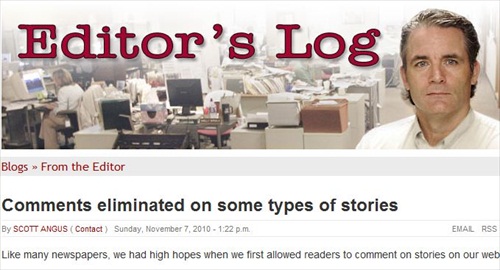 Crime, accident, court, race and sex stories on the Janesville (Wisconsin) Gazette now feature the above notice instead of a comment form. (Credit: Gazettextra.com)

The Wisconsin newspaper Janesville Gazette announced in a Nov. 7 blog post that its website, GazetteXtra.com, will no longer permit comments on certain stories.

The daily newspaper has a circulation of 20,272 copies, according to Mondo Times

The newspaper’s editor, Scott Angus, explained in the blog post that the decision is intended to hopefully “cut down on the ugliness” online.  Effective with Nov. 7 blogpost, the Gazette axed the comment feature on crime, courts, accident, race and sex stories, according to Angus.

Angus told iMediaEthics via e-mail that the Gazette “didn’t consult directly with other” news sites or organizations about the decision, but that he “did read many stories and blog postings from other editors or online experts on the topic.”

While the site hasn’t analyzed ‘the impact thoroughly” of the change in the week and a half since comments were banned on those stories, Angus told StinkyJournalism that the Gazette will check traffic.  “We obviously have fewer comments and fewer threads because we allow them on fewer stories,” he wrote in an e-mail to StinkyJournalism.  “But we still seem to have good conversations going on the stories that still have threads.”

In those sections, “The comments typically start out OK, but they deteriorate into insults, innuendo or otherwise offensive remarks.”

Angus explained that the Gazette has let readers comment on online stories since 2007, and each month, the newspaper’s site logs roughly 10,000 comments. Further, he wrote that he doesn’t “like” banning comments and real-name identification.

However, he told iMediaEthics by e-mail that the site might end up requiring real-name registration at some point.  “I think ultimately we’ll require people to provide their names. We’re not ready to go there yet, but that could be the only solution. The conversation will be smaller, but it will be better,” Angus wrote.

He reminded commenters that even if they are anonymous, “If someone wants to track you down badly enough, however, and that person is willing to pay to get it done, you might find yourself in a courtroom answering for that damaging comment on our website.”

While “the staff here at gazettextra.com doesn’t easily give up information on our commenters,” the site would have to turn over user’s IP addresses “if we received a subpoena,” he explained.  iMediaEthics asked Angus if a threat of legal action led to the post.

“No, we didn’t have any potential legal action before my Aug. 25 post. I read all I see on the topic and I try to keep up on trends and developments,” Angus told StinkyJournalism via e-mail.  “I had  seen several cases at other places that were interesting and seemed to provide lessons for us and our users. I also thought the warning might prompt people to be more careful in what they post – knowing that they could be sued even if they thought they were anonymous.”

Also, Angus suggested readers to “Stick to opinions,” “Stick to what you know,” and “Don’t be nasty.”

In March, he wrote letting readers know that the site won’t unpublish comments.

“We will not grant people’s requests to remove their comments or disable their usernames,” he wrote, explaining that the site doesn’t “have the staff or the time” to delete comments or usernames.

Next for the site’s commenting features is a prompt requiring readers to opt in to reading comments.  “Comments won’t be automatically displayed,” Angus wrote to StinkyJournalism.  The feature came as a result of reader request.

“This is in response to people who say they don’t want to read comments but sometimes can’t help it when they start right after the story,” Angus detailed.  “It seems kind of odd to have to protect people from themselves, but this seems like a reasonable step that won’t hurt anyone and could help some. It also shows we’re making an effort to respond to people’s concerns.”