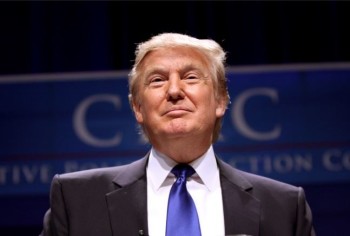 Americans are torn on whether the Congress should impeach Donald Trump and remove him from the presidency – with 42% saying it should and an equal number saying it shouldn’t. People with intense feelings are also equally divided: 34% will be upset if the Congress does not impeach him; 34% will be upset if he is. These are the findings of a new online USA Today/iMediaEthics poll of 1,233 adults across the fifty states, conducted July 17- 19, by SurveyUSA. (See full topline results and crosstabs. Read USA Today’s report on the USA Today/iMediaEthics poll here.)

The poll also finds more than half (57%) of Americans believe either there is enough evidence now for Congress to remove Trump from office, or that ongoing investigations will eventually provide enough evidence – including 29% of Republicans, 52% of independents, and 85% of Democrats who feel that way.

Despite expecting evidence to support impeachment, most Americans apparently believe it will not happen. Overall, a clear majority (57%) believe it is likely Trump will finish his first term in office, although only 27% are confident he will – including 54% of Republicans, just 21% of independents and 7% of Democrats. About a third of the public (36%) believes Trump will not last through his first term.

These results suggest that Trump is probably the most beleaguered first-term president in the country’s history, and certainly in modern history – highly unpopular among the public, with a significant portion clamoring for his impeachment barely six months after his inauguration.

Comparison with Nixon and Clinton – and Bush and Obama

A comparison of Trump’s situation with other recent presidents who have been targeted for impeachment reaffirms the current president’s precarious position.

The impeachment of Bill Clinton by the U.S. House of Representatives – and subsequent acquittal by the U.S. Senate – was highly unpopular. Leading up to the impeachment vote by the House, from October to December, 1998, the average results of USA Today/CNN/Gallup polls (which I helped oversee) showed 34% in favor, 63% opposed. Clinton’s approval rating at the time was in the mid-60s, and actually surged to 73% immediately after the House vote. (See topline here.)

When the Watergate hearings began in May, 1973, the effort to impeach Richard Nixon was initially unpopular with the public as well. Over time, with the hearings lasting well over a year, public opinion became more accepting of impeachment and removal from office, but it wasn’t until after the House Judiciary Committee actually voted out articles of impeachment at the end of July, 1974, that a majority of Americans agreed that he should leave office. At the 40th anniversary of Nixon’s impeachment, Pew presented a graph and discussed the polling during the 1973-1974 period, shown below: 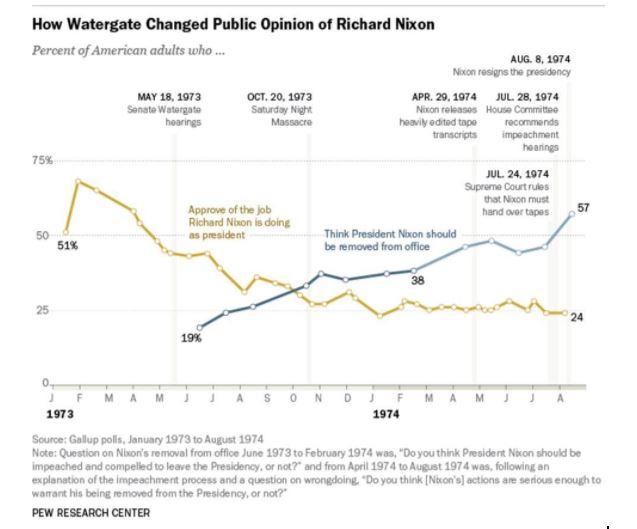 Note that Nixon’s approval rating surged after his overwhelming re-election in 1972, but then drifted lower over the next several months, in large part caused by a faltering economy and also ultimately by the Watergate hearings.

There was also some talk of impeaching George W. Bush and Barack Obama during their respective second terms, prompting CNN to conduct polls assessing the public’s response. At the end of August, 2006, 30% of those polled said Bush should be impeached and removed from office, while 69% disagreed. And in mid-July, 2014, a similar poll found 33% in favor of impeaching Obama and removing him from office, with 65% opposed.

These comparisons suggest that Trump’s impeachment numbers are worse than Nixon’s numbers at the start of the Watergate hearings, and, of course, also considerably worse than those of Clinton, Bush and Obama.

Other Polls on Impeachment of Trump

Two other recent polls find about the same number of Americans in favor of impeaching Trump and removing him from office as does the USA Today/iMediaEthics poll, though the other two polls also find somewhat higher opposition.

A MorningConsult/POLITICO poll conducted online (as was the USA Today/iMediaEthics poll) July 13-15, reports 40% of its respondents believe Congress should begin impeachment proceedings to remove Trump from office, while 46% disagree.

A Monmouth University poll, conducted by phone July 13-16, finds 41% of the people polled believe Trump should be impeached and compelled to leave the presidency, while 53% disagree.

The somewhat higher rates of opposition by these two polls compared with the USA Today/iMediaEthics poll may be a function of question wording. Both of the previous polls used a forced-choice format, providing no explicit “unsure” option in the question. The USA Today/iMediaEthics question, by contrast, asked whether people think the Congress should or should not impeach Trump and remove him from office, “or are you not sure?” It could be that when pressed for an opinion about which they may not have given much thought, respondents are more likely to say “no” to impeachment than say yes.

It is these intense feelings that are analyzed in subsequent charts.

It’s not surprising to discover that Republicans are overwhelmingly against impeachment, Democrats largely in favor, and independents mostly divided. 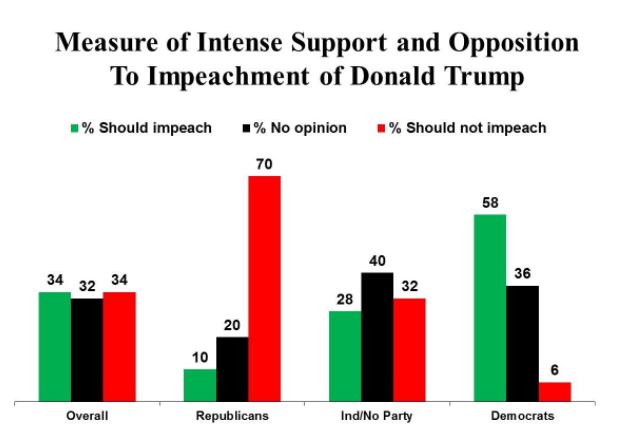 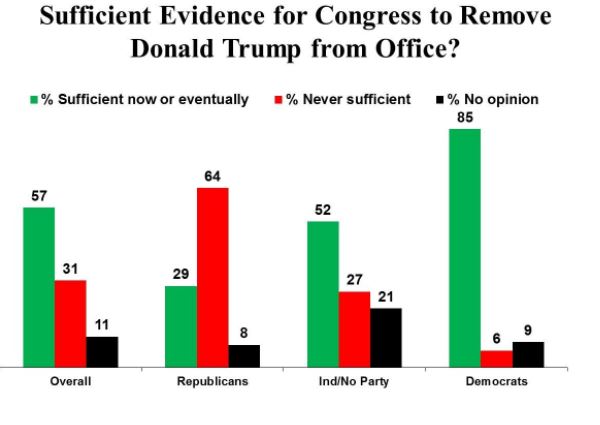 Although most Americans believe that sufficient evidence will eventually be found to justify impeachment, a clear majority also believe it’s likely that Trump will serve out the full four years of his term. 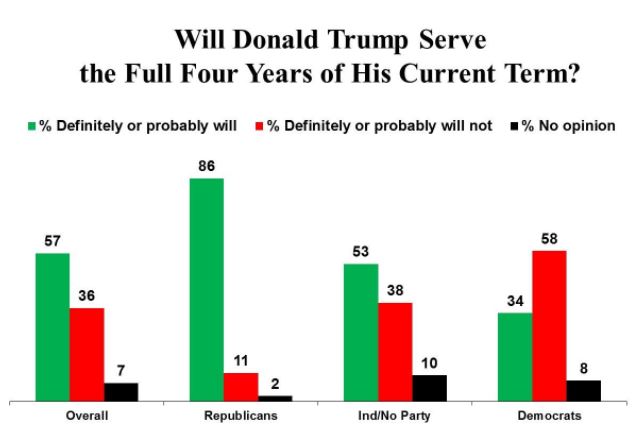 Republicans, of course, are the most optimistic that he will finish his term, independents less so, and a majority of Democrats expecting he will not.

Other Comparisons of Impeachment Attitudes by Demographics

As the table makes clear, Trump’s strongest supporters, apart from Republicans, are white males (net opposition to impeachment = -25 percentage points), Evangelicals (-20), and people who live in rural areas (-17), are over 50 (-14), and live in the South (-9).