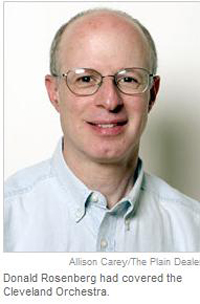 Donald Rosenberg is suing his newspaper's editor and three orchestra officials for his reassignment from the orchestra beat. Rosenberg had been consistently critical of the orchestra's director.(credit: Allison Carey of the Cleveland Plain Dealer; Posted on New York Times' website)

A reporter for the Cleveland Plain Dealer is suing both the newspaper and the Cleveland Orchestra.  The reporter, Donald Rosenberg, still works for the newspaper, but in 2008, he was removed from his position as music critic, Kent State University’s public radio station WKSU reported July 13.

The Plain Dealer blogged July 15 that Rosenberg, 58, covered the orchestra for 16 years.  His 2008 lawsuit is against the Cleveland Plain Dealer editor Susan Goldberg and three members of the management of the musical arts association – the parent organization for the orchestra.  The three – Richard Bogomolny, Gary Hanson and James Ireland III – extended the contract of the orchestra’s director, Franz Welser-Möst.

Rosenberg is suing the newspaper because of age discrimination and retaliation. He is suing the orchestra for defamation and interfering with a contract.

Cleveland Scene wrote May 5  that “the feud escalated in 2004, while Rosenberg covered an orchestra tour in Europe. The critic reported comments Welser-Möst had made to a Swiss magazine in which he described Cleveland as ‘an inflated farmers village’ where maintaining such a magnificent orchestra was dependent on relationships with ‘many wealthy widows.’ At one point, Welser-Möst referred to the ‘blue-hair ladies’ who come to matinee performances because they are too tired for evening concerts. Rosenberg shared it all with Cleveland readers.”

Because of that report, Cleveland Scene reported that Rosenberg said he was “stripped” of his access to the orchestra’s archives, not allowed to an office he used “to file reviews immediately after concerts,” and banned from backstage access during tours.

The Baltimore Sun’s classical music critic Tim Smith wrote July 13 wrote that “Suffice it to say that all of us who believe in criticism (music or otherwise) as a serious and valuable profession should be concerned with the outcome of this trial.”

Smith wrote Sept. 23, 2008 that Rosenberg wasn’t alone thinking that Welser-Möst “is not entirely worthy of leading one of the world’s greatest music institutions.”

And Smith reminded readers that a critic’s job “is not to echo the enthusiam of the audience or the board of directors or the musicians themselves. That’s what claques are for.”

Because of the rumors associated with the reassignment, Smith wrote the newspaper and the orchestra “are worse off” and that “music and journalism have taken a painful hit.”

The newspaper’s attorney, David Posner, said in opening arguments that the the paper intended on reassigning Rosenberg for years.

“This is not about music or musical knowledge but about honest and sincere journalistic judgments,” The Plain Dealer reported Posner said.

The Plain Dealer reported that after Rosenberg filed his lawsuit, he was banned from writing about the orchestra as “a matter of standard journalism ethics.”

iMediaEthics wrote about The Cleveland Plain Dealer earlier this year when it outted one of its anonymous commenters.  The e-mail address of the commenter, “lawmiss,” turned out to belong to a judge, Shirley Saffold.  In April, Saffold filed a $50 million lawsuit against The Plain Dealer for linking her to the comments.