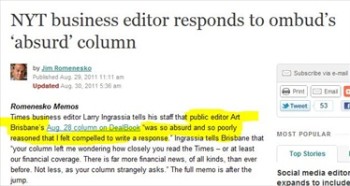 In his Aug. 27 column, New York Times public editor Arthur Brisbane criticized NYT‘s “financial news service” section, DealBook, and suggested the site features too much news on the players and actions  of Wall Street in lieu of reporting on the trends or bigger picture.

Noting that “It’s true that, within DealBook’s range of targeted topics, it delivers some hard-hitting material,” Brisbane questioned if the  Times’ fall 2010 expansion of the section harmed or limited the newspaper’s financial coverage.

While the Times’ Business Day editor Larry Ingrassia told Brisbane for his column that “The Times sacrificed no existing resources when it decided to enlarge DealBook,”  Brisbane wondered if the Times should have tried to “strengthen reporting elsewhere.”

However, Brisbane’s column was not received well by the Times’ Ingrassia. He responded via a letter that was leaked to Poynter’s Romenesko blog and later published on Brisbane’s blog.

Questioning “how closely” Brisbane looked at the newspaper’s “financial coverage,” Ingrassia argued that “There is far more financial news, of all kinds, than ever before. Not less, as your column strangely asks.”

He defended the Times’ reporting on the “European debt crisis” and claimed that because DealBook has grown, the Times has similarly widened its “coverage of finance.”

“Sorry, but when you start with a wrong premise and ignore the record, you end up with a wrong conclusion,” Ingrassia stated.

Reuters’ Felix Salmon agreed with Ingrassia in criticizing Brisbane’s column, which he called “ridiculous” and “utterly bizarre.” Specifically, he rejected Brisbane’s criticism of Dealbook’s high online presence compared with its print version, claiming that “DealBook is better online than it is in print.”