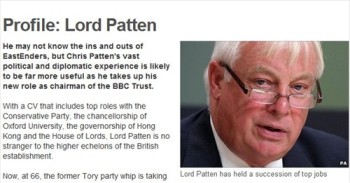 Patten argued that government regulation of the press could “pose a real danger to the public discourse” and called on the journalism industry to protect journalism ethics.

Concerning the Press Complaints Commission, Patten suggested that in the future the print regulatory body calls out journalism standards offenders more prominently.  “It may require an increased sense of shame where things go wrong,” he is quoted as saying.

Patten also called for journalists to “adopt a version of the Hippocratic [Oath] to replace or supplement the Editors’ Code,” according to the Press Gazette.