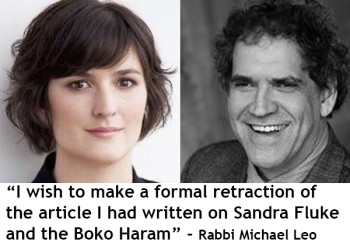 In a July 28 retraction, Rabbi Samuel explained his article was about the “war on women that is taking place in the Middle Eastern world.” He said he included quotes purportedly from Fluke “saying she is less concerned about the young women captured by the Boko Haram, than she is by women who must live under Republican rule.”

The quotes, however, were fake and came from a satire article.

In addition to unpublishing his article, Rabbi Samuel apologized.

“Apologies go out to Fluke and the local community for attributing statements that were never said,” Rabbi Samuel wrote. “It is important to take ownership for any mistaken information that appeared in my article. In all candor, I should have checked directly with the NPR affiliate just to confirm the veracity of the story. The manager informed me that this prank had fooled others as well.”

“We received a note from someone connected with Sandra Fluke’s campaign saying that Rabbi Samuel had picked up a false story.  I asked the rabbi to please check his sources.  He did, said he had been wrong.  He wrote his retraction, which we published, while pulling the original story from our report.  We considered the rabbi’s retraction and ours to be one in the same as he is our columnist.”

iMediaEthics read a cache of Rabbi Samuel’s article, which was published on his blog.

Rabbi Samuel’s column had criticized Fluke’s comments — now known to be false — and argued that the “real ‘war against women'” was in the Middle East. Rabbi Samuel wrote in part,

“Ms. Fluke’s hatred of Republicans reveals that this woman could care less about the real war on women that is taking place in the world today. Instead of using this interview to enlighten the public about her willingness to stand up for oppressed women’s basic right for human dignity and self-determination,  she unintentionally revealed to the entire world how detached she is from the issues she claims to champion, namely, women’s rights.”

According to Rabbi Samuel, he found the phony Fluke quotes on the website City Data, which had simply re-published an article by Duh Progressive.

Besides the clearly satirical name Duh Progressive, the site carries a disclaimer at the bottom saying it is “a political satire site” publishing “fictional” information. It also says it is in the style of the Onion. the Duh Progressive logo, at the top of the site identifies it as “Humor + Politics = Power.”

“I must say that as dire and barbaric as these Boko militants in Nigeria seem, we have to remember that if these girls are released and come to America as political refugees, they could end up working for Republican lawmakers here in California or in Washington, or end up living in a Red state in the South, which would no doubt make them wish they were still in the clutches of militant al-Qaeda-linked rapist terrorists.”

Further the article claimed Fluke lamented the Boko Haram kidnappees would also have a worse fate in Utah. The false quote said:

“You know they have arranged marriages in Utah, and an only 10-child-per-family policy?   Utah has the Great Salt Lake, too.   Salt is bad for you, it makes your blood pressure rise and leads to heart disease.  That’s very unhealthy.   And who likes unhealthy people? –Republicans!  …I think that the kidnapped girls in Nigeria would find themselves in even a worse situation here being around Republicans than they’re in right now.”

Duh Progressive’s article also said Fluke argued that having to pay for birth control and abortions is worse than “the reports of rape and sex slavery” by Boko Haram.

“And really, as far as sex and being the ‘subject of controlling men’ is concerned, I’d rather be a captive Nigerian girl than touched by Republican,” the satire article claimed. “At least the Muslim extremists are upfront about what they want to do, where as Republicans must lie about their despotic plans for the female race.”

iMediaEthics has reached out to Fluke, Rabbi Samuel and the NPR affiliate mentioned in the satire article for comment.