CJR appoints 'Public Editors' for 4 outlets, but none for itself - iMediaEthics

CJR appoints ‘Public Editors’ for 4 outlets, but none for itself 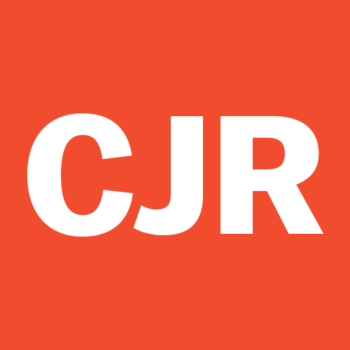 Columbia Journalism Review made waves in June when it appointed “public editors” to each of these four news outlets: New York Times, CNN, Washington Post and MSNBC.

Bjarne Schilling, the president of the Organization of News Ombudsman and Standards Editors, told iMediaEthics by e-mail, “Let me just say, that in ONO’s opinion ombudsmen should be appointed and paid for by media organizations. It should not be left to others, like the CJR, to attempt to fill the void when media organizations offer their audiences inadequate accountability and fail to step up to the plate.” ONO’s annual meeting was hosted by Columbia Journalism Review, and according to Pope’s announcement, that event inspired CJR‘s appointments.

The titles used by the CJR, “New York Times public editor” or “CNN public editor,” are potentially misleading, as they suggest to the public they are part of the organization, as the Times‘ now-defunct actual public editor position was. While CJR noted in tweets and a follow-up article that the positions are’t affiliated or within the news outlets in question, the original announcement does not make this clear.

CJR‘s editor Kyle Pope said he didn’t think the announcement wasn’t transparent enough in distinguishing that CJR‘s “public editors” aren’t affiliated with the news outlets they are assigned to. “I haven’t heard about any confusion from the public,” he e-mailed iMediaEthics. (iMediaEthics saw at least 2 tweets from news consumers citing confusion.) “As I mentioned above, we have seen annoyance from some of the outlets, but frankly we think that’s to be expected,” he wrote. However, when asked if CJR would include any disclaimer that its public editors weren’t affiliated with the news outlets in question, Pope said, “We have and will continue to point people to our explainer about what this is.”

iMediaEthics wrote to the New York Times, CNN, Washington Post, and MSNBC to ask if they would work with the CJR appointees or if they would only respond as they would with a typical media inquiry. New York Times spokesperson Danielle Rhoades Ha told iMediaEthics, “We didn’t know about the plan before it was announced. We will respond to their queries as we would with any other outside critic.” CNN and Washington Post declined to comment on the record; we haven’t heard back from MSNBC.

“We didn’t feel the need to ask in advance, and I’m not entirely sure it would even have been appropriate,” Pope wrote iMediaEthics. “The responses afterwards have ranged from muted to enthusiastic to skeptical and annoyed. We’ll see how it shakes out.”

However, Pope said for its articles, “We will always go to the news outlet and seek their comment and input,” and CJR would like the news outlet to “engage.” If CJR wants the outlets to engage, explaining what it planned to do and asking for comment in advance of their announcement might have helped. CJR will still publish its work regardless of no response, in an attempt to provide “input from readers and viewers,” Pope said.

iMediaEthics wrote to CJR editors and the four public editors. CJR didn’t respond to our e-mails at first, but we did hear from two of its four appointed “public editors,” who responded to our inquiries. After we asked those two appointees about CJR’s non-response, we did end up hearing back from CJR editor Kyle Pope. Gabriel Snyder, who is charged with monitoring the New York Times, responded instantly to iMediaEthics’ inquiry and provided some information about his role.

Snyder, who is a contributing editor at CJR, explained that Pope asked him to fill the role. It is part-time “with an aim to write two columns a month,” he said, noting, “There is no set term, but it’s an open-ended role for now.” Maria Bustillos, who is “public editor” for MSNBC, also said her role is part-time and that CJR contacted her for the role.

The four public editors are “contract freelance positions” with CJR. They are paid under CJR‘s “regular budget,” Pope told iMediaEthics. Given their freelance positions, iMediaEthics asked if CJR instituted a formal ban of letting the “public editors” freelance for their assigned news outlet, to which Pope said, “They will not be freelancing for the outlets they are covering,” which was not mentioned in CJR’s announcement.

CJR’s follow-up explainer article after its initial announcement which consisted of five tweeted questions and answers. There, Pope said the appointees will “be published exclusively in @CJR” and that “whether or how these outlets engage is up to them.” He responded to one tweet that he didn’t think that calling the CJR writers public editors is “a distortion” and that the four outlets selected were because of limited resources.

What do the CJR Four Plan for their Roles?

Pope told iMediaEthics the CJR freelancers who are now “public editors” were “chosen for their expertise and their body of existing work” and will “publish several pieces a month.” He said they will produce “reported pieces.”

When asked how he envisions his new role, Snyder said in part: “To my mind, at least, media critics speak for themselves. I see a public editor as serving as a conduit between a newsroom and its audience. It is a way for people (particularly people who aren’t media professionals themselves) to ask questions about the coverage they are reading: why did the NYT do this thing? (Media critics can sometimes play this role, but it’s not usually their main interest.) Since the announcement, it’s been really fascinating to hear what people in all kinds of fields wonder about the New York Times and, hopefully, I will be able to dig up some answers for them.”

Bustillos said, “I hope to draw attention to the near-disappearance of formal advocates for the public from U.S. media, and to demonstrate how an attentive person in this role can serve viewers and readers as well as publishers. I hope to serve as a sounding board and amplifier for MSNBC’s viewers, so that valid concerns can be heard and analyzed in public for the benefit of fellow viewers, media watchers, and the network itself. Cable news is an expensive service, and viewers should expect, and demand, very high quality information from it, and I mean to help make sure that’s what they get.”

A.S. Panneerselvan, the public editor for The Hindu, published a June 17 column that questioned if the CJR roles will be “effective” given the lack of access. “To have a Public Editor is to have a self-regulation mechanism; hence, it would be better for publications to nominate a designated person with clearly formulated terms of reference, rather than have an external body. The relationship between the news ombudsman and the Editor is rather nuanced and I am not sure whether an external ombudsman can maintain that delicate balance,” he wrote.

Disclosure: iMediaEthics’ publisher Rhonda Roland Shearer is a former member of ONO, but is still listed on ONO’s website as an associate member.

CJR appoints ‘Public Editors’ for 4 outlets, but none for itself