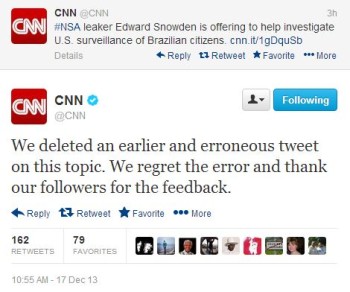 Would Edward Snowden spy? This morning, CNN deleted a tweet saying he would for Brazil after Glenn Greenwald complained.

The original tweet read, according to Mediaite: “Edward Snowden offers to spy on the US & help Brazil investigate NSA surveillance cnn.it/1gDquSb”

Glenn Greenwald, the journalist who has broken stories about NSA surveillance based on Snowden’s leaked documents, slammed CNN for the tweet, Mediaite noted. Greenwald, who was a columnist for The Guardian and is joining eBay founder Pierre Omidyar’s new journalism organization, called the tweet “remarkably reckless and false.”

Dear CNN: even for you, this is so remarkably reckless and false that it’s shocking https://t.co/p5u3EkOvKN

We deleted an earlier and erroneous tweet on this topic. We regret the error and thank our followers for the feedback.

Greenwald responded to the deletion:

CNN did the right thing and deleted that tweet — Glenn Greenwald (@ggreenwald) December 17, 2013