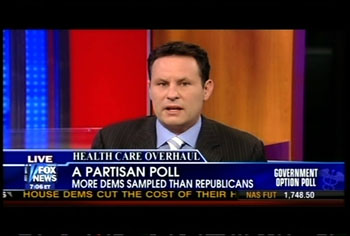 MediaMatters.org, a progressive website dedicated to correcting conservative misinformation in the U.S. media, brought up two instances of bad poll reporting in the press last week.

In one, they criticize the conservative press for calling a recent poll finding majority support for a public health care option “fraudulent,” and “rigged.”  In another, they specifically call out the program Fox & Friends for using an outdated poll to support their claim that Fox News’ audience is “more balanced” than that of other organizations.

iMediaEthics contacted polling expert and former Vice President of the Gallup Organization, David Moore, to gauge whether MediaMatters’ critique of these two polling stories was merited.  Moore, who co-wrote iMediaEthics’ Top Ten “Dubious Polling” Awards, says the site is right to criticize both of the polling claims, and he agreed that Fox definitely missed the mark in its reporting.

On the claim by Fox & Friends that Fox News has a more balanced audience, MediaMatters quoted the October 21 edition of Fox News’ Fox & Friends:

DOOCY: Right. The point is, as you can see, we’ve got — we’ve got in the 30s the number of Republicans and Democrats watching and in the 20s. And then at CNN they’ve got teens when it comes to Republicans. So our audience really is more balanced than the other two news networks.

Moore says for Fox to claim it has the most “balanced” audience “it should compare its audience with the country as a whole.”

“For 2008, the distribution of party identifiers is (according to the 2008 Pew poll) 25 percent Republican, 36 percent Democrat, and 29 percent Independent. So, the key is to see how much each of those media groups diverges from the public as a whole,” Moore says.  For Fox to be perfectly balanced it would need to have an audience that matches this ratio.

So how much do Fox’s viewer statistics differ from the national makeup?  Moore gives the figures for Fox and four other news outlets showing how much they diverge from the average, according to the Pew poll Fox & Friends cites:

By these numbers, Fox has 14 percent more Republican viewers than it would need to have a perfectly “balanced” viewership, according to the 2008 poll.  It also has three percent less Democrats and seven percent less Independents.

CNN meanwhile, has seven percent less Republicans than it would need, 15 percent more Democrats, and six percent less Independents.  To get a total assessment of balance, Moore adds the absolute values of all three deviations.  (For Fox, that means adding 14 + 3 + 7 = 24, for example)

On MediaMatters’ other critique—of Fox News and other conservative media bashing a recent ABC News/Washington Post poll, which found a majority of Americans support a public option for health care—Moore says the website hit the mark again.

“Why Fox & Friends decided to go after that poll and claim it was fraudulent, and not go after the many other polls showing the same result, is surprising to me. Many others also showed a majority in favor of the public option,” he says.

MediaMatters calls out Newt Gingrich, Rush Limbaugh, and Fox News’ Gretchen Carlson and Steve Doocy for “baselessly” attacking the poll, which the ABC News polling director said is “in accord with most other recent good-quality surveys measuring political partisanship.”

According to a post on the website of Salt Lake City radio station KSL, Gingrich said on air: “I think this poll was deliberately rigged and produced a result that’s fundamentally false.”

On his radio show, Limbaugh said of the poll, “It made me so mad because I knew it was fraudulently reported and fraudulently probably compiled.”

Discussing the poll on Fox & Friends, Doocy stated: “[Y]esterday, when we saw this — it’s The Washington Post/ABC poll — it made us go, ‘What? That’s — that’s bigger than the margin of error.’ Fifty-seven percent of you favor a public option, 40 percent of you are opposed to a public option. So, if you read, however, the small print, you realize, hey, wait a minute, the deck is stacked.”

While Fox & Friends was discussing the poll, one of the graphics Fox News ran stated: “A Partisan Poll: More Democrats Sampled Than Republicans”:

According to MediaMatters, Fox & Friends’ Doocey and Carlson suggest that a different question wording would have given different results.

After noting that the ABC/Washington Post poll asked, “Would you support or oppose having the government create a new health insurance plan to compete with private health insurance plans?” Doocy stated: “On its face you think, “That sounds pretty good.” So you can understand why it would be more positive than negative.” Carlson then responded: “As opposed to just saying, ‘Do you like the government-run option?’ That would be more straightforward.” Doocy replied: “Right. Or, ‘Do you — are you in favor of the government taking over the health care situation in this nation?’

But actually, Carlson’s suggestion would not yield more accurate results because the phrase “taking over” is highly leading.  Poll questions are not supposed to guide responders toward one direction or another, but rather present the question with as little bias as possible.

Most importantly, regardless of these specific attacks, Moore says, this ABC News/Washington Post poll is only one of many that have found a majority in favor of a public option. (A number of examples are available here.) So, whether or not this specific poll holds water, there is strong evidence from a large sample of polls that its results, at least, are correct.