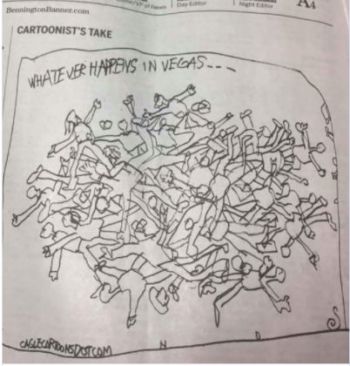 Vermont newspaper the Bennington Banner and Iowa newspaper the Telegraph Herald both apologized for publishing what was generally considered an offensive cartoon about the Las Vegas shooting this weekend. The cartoon by Randall Enos showed a pile of outlined bodies with the caption “Whatever happens in Vegas…”

On Facebook Oct. 3, the executive editor for the Bennington Banner‘s publisher, New England Newspapers, published an apology saying the cartoon’s publication “was not the right time or the right place, especially since Sunday’s night’s mass shooting hit so close to home for our readers and neighbors,” Moran wrote. He also directly apologized to the family of Sandy Casey, a woman originally from Vermont who died in the Las Vegas shootings.

Moran went on, “Our interpretation of Randall Enos’ cartoon was that little would be done with regard to gun control measures in the United States even after such an unprecedented tragedy. While we believe that is a conversation that needs to happen in this country, we must first mourn and honor the victims and provide comfort to their families and friends. We regret publishing the cartoon.”

The Bennington Banner published an apology on its website from New England Newspapers president Fredric D. Rutberg. “The decision to publish was made in haste,” he wrote. “We are addressing the matter internally.” Further, Rutberg noted, “The gravity of our error in judgment was magnified by the fact that one of victims of the unspeakable horror was a native of Dorset, whose family and friends must have been particularly offended by this cartoon.”

Rutberg also said he would meet with any readers Oct. 4 in the office. Rutberg said he and readers agreed the cartoon was “insulting and in bad taste.” By phone, Rutberg told iMediaEthics that only two people showed up Oct. 4 to talk — one was a member of the media, and the other came to speak about the newspaper in general. He said he has responded to many phone calls and e-mails, but wasn’t sure how many were readers versus people from other areas who read about the cartoon.

“I think people have acepted the fact that it was an honest mistake, and they are disappointed as we are,” Rutberg said to iMediaEthics. “The publication of this cartoon inadvertently exposed people to psychic pain and anguish that shouldn’t have been done, and I’m very sorry that we had anything to do with it.”

@kimguilfoyle This political cartoon was in a local VT paper. @banner_news. As a Vermonter I am disgusted. pic.twitter.com/u8G06BlAeH

The Telegraph Herald in Dubuque, Iowa, also apologized for publishing the “Whatever happens in Vegas” cartoon, calling it a “judgment error.” The Oct. 2 apology from editorial page editor Brian Cooper says the cartoon was published for two hours Oct. 2 before being removed. He said he didn’t think Enos meant to mock or offend, and that he didn’t intend to by publishing the cartoon.

“My take was that Enos conveyed a somber contrast between the monumental act of violence with a city generally associated with (and marketed as) ‘fun,'” Cooper wrote in part. “However, many readers have made it clear to me that I was wrong.”

Publisher Steve Fisher told iMediaEthics by e-mail, “As stated in our apology, this error in judgment is one that we deeply regret. However, it did bring to light areas of improvement for our organization. We learned that our editorial page vetting process for online content was not as strict as our print process. Because of this incident, we are now working to improve it.”

Fisher noted that the paper has received “a couple hundred negative comments on our Facebook page.” While the Telegraph Herald has heard from readers in support after the apology, Fisher added, “Understandably, there were many others who did not accept our apology. Though we were embarrassed by what happened, we wanted to publicly admit our error in judgment and assure our readers that we’re taking steps to prevent a similar incident from happening again.”

Other Media Ethics issues in Reporting on Las Vegas Shooting

Gateway Pundit deleted a story after wrongly reporting that Geary Danley was the shooter.

CBS fired a vice president in its legal department for a Facebook post saying she wasn’t “sympathetic” with Las Vegas victims because “country music fans often are Republican gun toters.”

The Bennington Banner is in Vermont, not New Hampshire, as the headline originally said. We regret the error.